Secretary Ryan McCarthy wants to use more other transaction agreements (OTAs) to modernize the Army, he said the National Press Club Friday.

The faster method of contracting is the Army’s best bet to achieve its ambitious modernization goals, McCarthy said. The OTA authority, which was expanded by the 2016 National Defense Authorization Act, allows agencies to sidestep the Federal Acquisition Regulation and work with innovative, small companies that don’t normally do business with the government.

“It is the speed of business,” McCarthy said of using OTAs. “We are changing the way we do business in Army acquisition.”

While much of the modernization the secretary touched on during his hour-long press conference had to do with upgrading weapons systems, the “foundation” of all Army modernization will be migrating to the cloud, he said.

Other transaction agreements have become popular across the military and civilian agencies alike. Money has been increasingly flowing from government to industry through OTAs with $2.3 billion in fiscal 2017 jumping to more than $4 billion in OTA contracts in fiscal 2018, according to the latest BGOV200 analysis.

This type of contracting has become critical to the Army’s newest command, Army Futures Command, based in Austin, Texas. McCarthy was the lead in selecting and helping to stand up the location for the new command while he was undersectary in 2018. The command is close to the city’s startup scene and McCarthy wants to further the collaborative ethos of the AFC across Army acquisition. 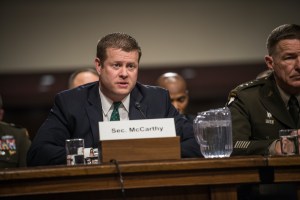 OTAs are contract of choice for Army’s modernization, McCarthy says