A critical piece of the future of networked warfare is a technology already familiar to many consumers and hobbyists: small drones.

The idea is that small unmanned aerial systems (sUAS), or drones, can collect data at tactical levels, buzzing around adversaries and in front of forward-deployed troops. With the right networks and software architecture to run the systems, the flying data-collectors can send back critical information to troops on the ground and cloud servers.

Military leaders say the technology will be crucial in future battlefield operations. But despite all the excitement, the Department of Defense has struggled to field drones easily across the enterprise. The difficulty finding the right technology is part of the problem, and more broadly, the existing marketplace has matured in a way that effectively has shut out the DOD.

Bringing the services’ vision for drones into reality will depend on the software architecture and networks they operate on, according to interviews with experts across the Army, Defense Innovation Unit and industry. In the private sector, companies are springing up to create synchronization in software to allow different types of aerial systems, ground controllers and payloads to talk with each other in flight. The military is fast on its heels following the concept.

Another major challenge so far has been the fragmented U.S. market for drones. U.S. firms have struggled to compete with Chinese mega-manufacturer DJI, which the Army banned in 2017 over fears of data espionage and weak cybersecurity. Many other government and military agencies have followed suit in recent years with their own bans of DJI and Chinese-made drones. Without a strong U.S. competitor that can offer the military a single trusted and cyber-secure option, piecing together solutions has been slower than expected.

“Our men and women in uniform were left with no options at all,” Matthew Borowski, an sUAS technical project manager at the Defense Innovation Unit, told FedScoop in September of where the military was when DJI started to get restricted in 2017. Since, he and others at DIU have been working for years on a new “trusted” drone procurement pipeline.

The military, with its vast budget and procurement resources, faces an uphill battle with drones in particular because the market is really targeted for consumers. Most of the DOD’s other tech is purpose-built for security or defense work, but the type of cheap drones built for backyard photography lacked the cybersecurity and data privacy the department needed for its sensitive operations. And with DJI’s dominance, few U.S. companies had the scale to start selling to the government.

The same type of thinking for getting drones to work at scale — open architecture software, prioritizing interoperability and data sharing, and finding trusted companies to work with — has applications in the military’s approach to emerging and commercial technologies it wants to use, acquisition reform advocates have said. For something like artificial intelligence, data sharing and interoperability are often-cited buzzwords former officials say are need for success. For flying cars, which the Air Force has its eye on, building a U.S.-based market early is a lesson it learned from early drone debacles.

“The sticking point is having somebody drive interoperability,” Borowski said.

How the military found its way

Leaders at the top of the Army have especially stressed the need to reduce the “cognitive load” on soldiers with manned/unmanned teaming. Small drones check many of those boxes with their ability to fly autonomously and collect copious amounts of data. The Army is even more excited by the idea that soon soldiers will be able to work efficiently without the need for direct control from a ground operator because of improvements in automation and computer vison that could direct an aircraft through obstacles.

“You got this constant umbrella of sensors that are around you and working together and reconnecting back through this AI cloud,” Col. Samuel Edwards, director of the Army’s Robotics Requirements Division, told FedScoop. “That is kind of what we talk about and what we mean when we use the words autonomous and AI.”

Before it was banned from government use, many civilian and military agencies worked with DJI for the low costs, usability and availability of its tech. DJI’s global dominance also fragmented the U.S. companies trying to break into the market, as almost none could meet DJI’s price point.

“We collectively were slow to see where that would go,” Dave Sharpin, head of drone company Auterion’s government team, said of the fast rise of DJI. Auterion works with the Army on drone interoperability.

In August the Defense Innovation Unit, where Borowski works, launched its solution with a purchasing program called Blue sUAS that gives agencies across the government the ability to purchase secure systems for aerial missions. Since its launch, the program that operates similarly to a General Services Administration Multiple Award Schedule, has expanded to also offer state and local governments the ability the purchase drones they can trust.

Borowski and his fellow drone expert and project manager at DIU, Chris Bonzagni, said a critical part of getting the drone program off the ground was to create a common open-architecture software base to be able to mix-and-match different hardware components. The Army plans to take that concept a step further in the years to come by building universal remote controls and other field tools to maximize interoperability between not only drones but ground robots and other autonomous systems.

“Part of the purpose of using an open architecture scenario is we can bring in any capacity that we need,” said Carlos Correia, director at the Soldier Unmanned Aircraft Systems product office, which aims to leverage the use of small commercial drones. It’s different than the Blue sUAS project launched by DIU, but the two offices worked closely together and found similar solutions to their problems.

One controller to rule them all

By 2024, the Army wants to have a single source of commands from a “Universal Robotic Controller Application” to control its flying systems and be able to ingest the data they send back. Also connected to the universal controller, or URCA, would be AI-enabled analysis located in cloud-at-the-edge servers. The network the drones run on will be just as important as the drones themselves, enabling the capabilities that cannot be put directly in the processors on the drone, Edwards told FedScoop.

“We really approach it from looking at the drone first and small UAS first,” Edwards said. “Whatever is left, we rely on that AI [in the] cloud” to do.

The idea is emblematic of the Internet of Things approach the military is leaning toward with autonomous technology that can also link to central servers to enhance battlefield awareness.

Other technology enhancements will also be critical, such as increased bandwidth and moving cloud computing capabilities to the edge. Autonomy will also be key, like being able to recognize adversaries without even needing to connect back to central platforms for image analysis.

“The drone is going to have to be able to do a lot of things on its own,” Edwards said. 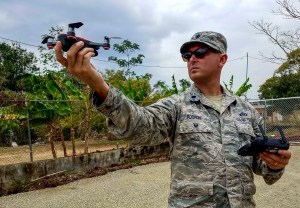 The Pentagon wants small drones to be the future of networked warfare, but buying them hasn’t been easy