Peraton has won a contract to develop a tool for the Department of Defense to make its use of tactical networks simpler and more efficient, the company announced Tuesday.

DOD leaders have pointed to AI as critical to enabling the use of 5G and saving precious spectrum space on test ranges that are often limited by spectrum constraints.

The contract for OSCAR is worth up to $18 million and was issued to Peraton Labs, the applied research subunit of Peraton, by the National Spectrum Consortium, which was founded to accelerate DOD’s work on 5G. OSCAR will focus on both the legacy spectrum space and new, low-bandwidth 5G networks that can deliver more data at faster speeds than traditional networks.

“In real-time, you will be reconfiguring radio assets to different frequencies based on any interference that we see in the operational environment,” Sunil Samtani, Peraton Labs’ vice president for network systems, told FedScoop.

On test ranges and in the field, military units must often deconflict frequencies and networks to allow multiple operations to happen at once. With OSCAR, Peraton hopes to use machine learning to assist spectrum managers in orchestrating the most efficient use of different frequency bands.

Samtani said it’s even more important now that DOD is losing some of its exclusive spectrum space.

“You have a crunch for spectrum; spectrum is a very limited resource,” he said.

Using 5G and spectrum efficiently are also key to the DOD’s Joint All Domain Command and Control (JADC2) and electromagnetic strategies. JADC2 is the DOD’s new framework of linking data from operations across all domains. That type of synchronization requires efficient use of available spectrum, Samtani said.

The tech itself will use multiple kinds of machine learning to orchestrate spectrum, Samtani said. It pulls data from sensors to detect interference, alerting a spectrum manager to the radio conflicts, and also uses automation for many of the tasks that currently need a human in the loop to accomplish. 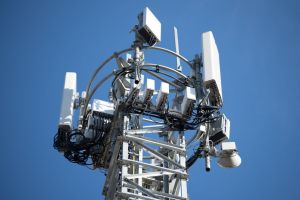 Peraton wins contract to boost DOD’s spectrum use with AI