The General Services Administration’s Enterprise Infrastructure Solutions (EIS) contract promises to bring about one of the largest telecommunications overhauls in government history.

But a new report urges agency leaders not to delay in crucial preparations to transition from more than 90 contracts to the 15-year, $50 billion EIS contract set to begin in May 2020. 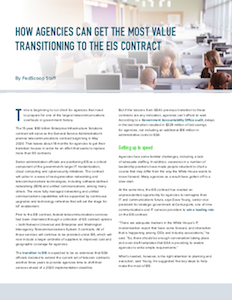 According to a Government Accountability Office audit, delays in the government’s last telecommunications transition resulted in $329 million of lost savings for agencies, not including $18 million in administrative costs to the General Service Administration (GSA).

“Everyone needs to recognize the current end date to all of these services contracts,” and the strategic work that has to be done in advance “to enable a smooth transition,” said Dave Young, senior vice president for strategic government at CenturyLink.

Young recommends that what’s needed is the right attention to planning and execution. In a new report, written by FedScoop and sponsored by CenturyLink, Young shares several best practices to help agencies plan for the transition to EIS.

At the top of the list is developing a collaborative relationship with the EIS awardee community. Having pointed, yet informal, conversations with awardees will help acquisition officers and IT managers get familiar with the landscape of service providers. Agencies should nurture “a deeper understanding of how providers and their technology platforms are likely to evolve over the 15-year life of the EIS,” according to the report.

The EIS contract will usher in a wave of next-generation networking and telecommunications technologies, including software-defined networking (SDN) and unified communications, among many others. This is a critical component of the government’s IT modernization initiative and will replace more than 90 existing contracts.

What makes EIS revolutionary is that it enables agencies to award multiple contracts in order to leverage the benefit of continuous competition, according to contracting experts. Young suggests that agencies make a dual award for the network so that each contractor is responsible for providing status on health and each must compete with the other.

“Make sure a contractor is performing through greater transparency. Nobody should think they are going to get an award for an agency’s business. They should compete for that business through quality service and price competitiveness,” he said.

EIS is designed to be flexible so that agencies can look to improve in the future. For the contract to be successful, agencies need to complete their inventory. More than what is located at a physical location, the inventory must include an assessment of the network technology that connects it. However Young assures that an inventory doesn’t have to be perfect. The aim is to build an acquisition structure that can evolve over time.

“Agencies need to do their homework and be comfortable with what the competitive landscape looks like before they get to the requests for proposals (RFPs) stage,” said Young.

Read more about best practices moving onto the EIS contract.

This article was produced by FedScoop for, and sponsored by, CenturyLink. 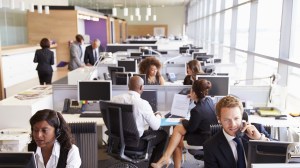