Department of Veterans Affairs Secretary Robert Wilkie stressed Wednesday that even though he fired his deputy overseeing the department’s ongoing electronic health record modernization Monday, the project is moving forward as normal.

Deputy Secretary James Byrne’s removal “will not impact it at all,” Wilkie said at a press conference at the National Press Club. As VA’s No.2, Byrne was the top accountable official for the modernization project.

The project is a massive migration of the electronic health records of millions of veterans from the outdated Veterans Information Systems and Technology Architecture (VistA) platform to a cloud-based commercial Cerner system. The department is working in partnership with the DOD to ensure seamless interoperability between the two as active service members retire and depend on VA health services.

Byrne’s firing was simply a matter of “not gelling” with other members of the team, Wilkie said in response to questions from reporters, denying that it had anything to do with the handling of a highly publicized sexual harassment case at a VA hospital in September. In an earlier statement, he said he had a “loss of confidence” in Byrne.

Two other high-ranking VA officials overseeing the day-to-day management of the EHR program — John Windom and Melissa Glynn — remain in place, Wilkie said, and he has confidence their work will continue as planned. The VA will give the White House names of candidates to replace Byrne soon.

While Wilkie didn’t directly address if the launch of the modernized EHR is still scheduled for late March, he said “I expect us to be able to launch this. The mission goes on.”

Wilkie listed other emerging technology initiatives the VA is pushing Wednesday. For instance, the first 5G VA hospital in the country, the VA Medical Center in Palo Alto, Calif., will go online later this week, he said.

The hospital will use 5G speed and bandwidth to give doctors “richer” and “more detailed” patient information, Wilkie said. Having more information delivered with lower latency will be a “breakthrough” for surgeons in the operating room, the sectary added. 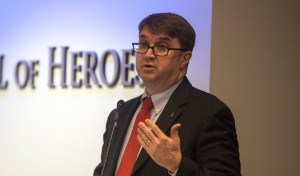