During a visit Thursday to the Department of Defense’s Defense Innovation Unit Experimental outpost in Silicon Valley, Secretary Jim Mattis expressed his admiration and support for the Obama-era creation.

“I don’t embrace it; I enthusiastically embrace it,” he said, while on his way to the West Coast. “And I’m grateful that Secretary Carter had the — had the foresight to put something in place to anchor the Department of Defense out there.”

Former Secretary of Defense Ash Carter launched DIUx in August 2015 and led the pivot to DIUx 2.0 in May 2016, establishing new leadership and an expanded nationwide focus. In addition to its original Silicon Valley location, the experimental investment vehicle now has offices in Boston and Austin, Texas.

And according to Mattis, DIUx is here to stay.

“There is no doubt in my mind that DIUx will not only continue to exist, it will actually — it will grow in its influence and its impact on the Department of Defense,” Mattis said in a press conference on Thursday.

Mattis suggested that DIUx Managing Director Raj Shah has the ear of top brass at the Pentagon. Shah is working regularly with Deputy Secretary Patrick Shanahan and will even “have direct access to me,” he said.

Still, some lawmakers have expressed concern that DIUx isn’t really the innovative answer it is made out to be. Texas Republican Rep. Mac Thornberry, chair of the House Armed Services Committee, is worried that efforts to invest in emerging tech at DIUx overlap with other DOD projects. “This question is: What is this office doing that’s different from what others are doing?” Thornberry asked recently, according to the Associated Press.

According to DIUx itself, the very existence of such a program is changing the mindset around collaboration between private sector startups and the Department of Defense. So far, over 450 companies from 39 states have competed for DIUx grants, the organization says. From that pool, DIUx has granted $100 million to 45 pilot projects in the areas of autonomy, information technology and more.

DIUx bets are also encouraging further private sector investment. The 37 companies that DIUx has contracted with since June 2016 have cumulatively brought in around $1.8 billion in venture funding, according to a DIUx report on its third quarter results.

“[I’m a] Big admirer of what they do out there, about the way they germinate ideas, the way they harvest ideas, from one breakthrough, rapidly, to another, and that —  So I’m going out to see what we can pick up in DIUx,” Secretary Mattis said. 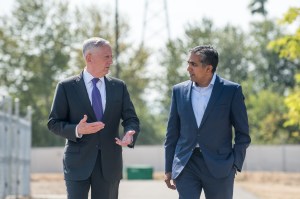