Bob Ingegneri, who was CFO of DIU from May 2019 to June 2020, recently laid out 15 allegations of what he saw as unethical behavior in an official complaint to the DOD inspector general. The IG confirmed receipt of Ingegneri’s complaint, but not its contents or if an investigation has been opened. Ingegneri alleges that during his time with DIU, Director Mike Brown used his position to hire people close to him and increase payments to contractors in his circle.

“The challenge with what DIU did was that I don’t think they did much that was illegal…but I definitely think it was unethical — that’s really my biggest complaint,” Ingegneri told FedScoop in an interview. He specified it was “the hiring, funding, salaries, that were not being executed ethically.”

Ingegneri reported his concerns to Brown directly, as well as Brown’s No. 2, Mike Madsen, and now the DOD IG, he said.

His complaints come at a critical time as President Biden recently nominated Brown to be the next undersecretary for acquisition and sustainment, the top acquisition official in the Pentagon.

Despite the complaints, Ingegneri reiterated his support for DIU’s mission and that he fully supports the people working there. He even complimented many of Brown’s qualities as a leader, calling him charismatic, intelligent and hardworking. His concerns, rather, were specific to the culture of pushing the boundaries of regulations and on contracting, hiring and personnel, he said.

“DIU leverages a variety of U.S. government and DoD competitive and direct hiring authorities to attract the expertise needed to execute its unique mission, in order to provide the speed and agility not always available to DoD in today’s competitive hiring landscape,” Madsen said in a statement.

Madsen’s statement went on to say that “DIU has always made a concerted effort to validate candidate expertise, and over the last few years we have formalized the process, requiring direct hire candidates to interview with at least three DIU leaders.”

DIU has been a darling of advocates for defense innovation. It was set up in 2015 by then-Defense Secretary Ash Carter to use rapid acquisition authorities to purchase emerging technology. It has leveraged billions of dollars to work with mostly non-traditional defense companies in prototyping technologies in fields like artificial intelligence, cybersecurity and others.

The announcement of Brown’s nomination to be the top buyer in the department was initially seen as a win for injecting commercial tech more quickly into the DOD. The spokesperson for the Senate Armed Services chairman did not respond to a request for comment.

Ingegneri gave examples of what he saw as unethical behavior, including allegations of contractors who had connections to DIU leadership being hired by companies working with the unit. Some contractors also requested compensation at higher levels than normal based on inside information given to them by Brown and others around him, he alleged

Another issue was with hiring and personnel. Job descriptions were written narrowly and with specific people in Brown’s circle in mind, Ingegneri alleges.

“When writing requirements for a government civilian position, DIU would write them so specific that only the person they preselected would be able to qualify,” he alleged.

Assignments with service members were created outside of normal practices, he alleges, like an Air Force major who was trying to achieve an advanced degree at a university in California and later continued working at DIU.

“It just continues today that even the young active-duty captains that are being assigned to the unit are being led astray almost instantly,” he said. While Ingegneri left nearly a year ago, he said he remains connected with many associated with the unit.

Both contracting and hiring with government money are strictly regulated to prevent nepotism, or taxpayer dollars being directed to people based on personal connections rather than merit. Ingegneri alleges that Defense Federal Acquisition Regulations were not broken, per se, but bent and their intent not followed.

Since Defense One first reported Ingegneri’s allegations, he said that “four to five” colleagues have reached out to express their support and concur with his assessment of the situation.

“Really what I hope the IG does is come in and look at the organization and bring it back within government processes and procedures,” he said of his motivations for speaking publicly. “There are some good people in there.” 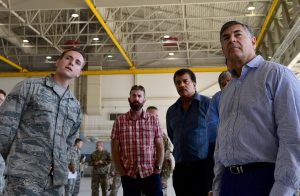