The secretary of the Air Force wants to increase his department’s efforts to acquire emerging technologies from the traditional defense industry, not just Silicon Valley, as other leaders have focused on.

Frank Kendall, who was the undersecretary of acquisition, technology and logistics in the Obama administration, said that the Air Force has not done enough to purchase and collaborate with companies familiar with its core mission. His comments contrasted with previous DOD leaders that have made it a priority to reach out to non-traditional defense contractors and Silicon Valley companies. He applauded those efforts, but said companies that sell to the military still have more to give.

“While there has been a lot of emphasis on new sources of technology from places like Silicon Valley, certainly a worthy initiative, there has not been enough effort to tap into the capabilities that exist in both major defense contractors and defense-oriented non-profit organizations,” he said during the Air Force Association’s Space & Cyber Conference Monday.

Kendall — who was on the board of defense contractor Leidos and has worked as a consultant while outside of government — said his experience in industry showed him there was more “intellectual capital” in defense companies than the military was taking advantage of.

Previous Department of Defense leaders have taken considerable efforts to court Silicon Valley companies for their advanced tech. Former Defense Secretary James Mattis visited the headquarters of Amazon in Seattle, Wa, and Google’s parent company Alphabet in California in 2017 in an effort to boost their participation in defense work.

A study from Georgetown’s Center for Security and Emerging Technology, published late last year, demonstrated a largely positive or neutral view of working with DOD among tech workers. The finding came despite recent high-profile instances of tech workers revolting against DOD contracts, including the Air Force’s Project Maven.

The DOD’s Defense Innovation Unit, over which Kendal has no control, is also based in Mountain View, Ca, the heart of Silicon Valley.

Kendall emphasized the need to work with companies that he said understand the strategic landscape and the mission of the Air Force.

Defense companies, “are well positioned to attack and help solve our operational problems,” because they “understand quite well,” Kendall said.

One key lesson from tech companies that Kendall said he wants to bring into the Air Force is a tight collaboration between product developers and product users.

“I will be doing everything I can to bring that same approach to our shared capabilities,” he told the virtual and live audience. 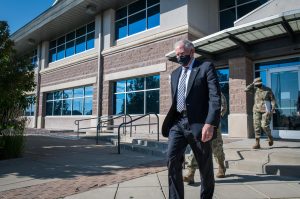