Roper, who left his role as the assistant secretary for acquisitions, technology and logistics in late January, was one of the military’s biggest boosters of emerging technology, especially artificial intelligence. As a senior counselor, he will continue to work on issues similar to those he led while in government — though his position is only part-time, according to the firm.

“Dr. Roper is widely viewed as one of the Department’s most innovative leaders in recent years and we are excited to welcome him to Pallas Advisors,” Tony DeMartino, a founding partner of the firm, said in a release. “He is well-versed in the challenges our clients face and will add immense value to our mission.”

Pallas Advisors has a slew of former high-ranking officials who serve on its board and as consultants, including Tony Thomas, a former commander of U.S. Special Operations Command, and Gary Cohn, who was director of the U.S. National Economic Council under President Trump. Along with DeMartino, the firm was co-founded by Sally Donnelly who served as a senior adviser to then-Secretary of Defense Jim Mattis. In that capacity, she played a role in building the Pentagon’s relationships in Silicon Valley.

“Fully unlocking private sector innovation for the military was my passion while serving in government,” Dr. Roper said in a statement. “I am excited to work with the Pallas team to continue this important pursuit.”

Correction: Feb. 17, 2021. An earlier version of this story incorrectly stated that Sally Donnelly worked directly on the Pentagon’s JEDI procurement. 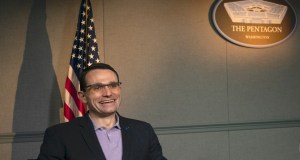