The top Democrat, who is in charge of the Senate’s agenda, discussed policy with Smith including two bills that are making their way through Congress right now related to increasing Big Tech competition, the journalism industry, and data privacy, four sources familiar with the meeting told FedScoop.

If they become law, the bills discussed during the meeting could force Microsoft and other big tech vendors to change how they operate in consumer and federal markets.

In particular, Senate bills S.2992 and S.2710 would restrict the collection and use of internal vendor data and place restrictions on Big Tech companies related to installing and uninstalling software on their products.

Schumer was spotted in Bellevue, Washington last week and is expected to have traveled to the state to meet with tech executives like Smith and for fundraising purposes.

Liberal advocacy groups have recently called on Schumer to disclose any “dark money” or hidden funds that he and other Democrats have received from Big Tech companies like Microsoft in order to remove the appearance of any conflict of interest.

The American Innovation and Choice Online Act (S.2992), would prevent tech giants like Amazon from unduly favoring their own products on their websites or creating cheaper copycats of existing products using internal data.

Meanwhile, the Open App Markets Act (S.2710) would regulate the management of Apple, Google and potentially Microsoft’s app stores, which advocates say would enable greater competition on the platforms.

These are the two most significant antitrust bills that Schumer supports, and which the Senate majority leader is expected to bring up for a vote later this summer. The bills, which have bipartisan backing, are expected to have enough support pass within Congress and become law if they are bought up for a vote.

The legislation could make it more challenging for Microsoft to bundle its software programs like Microsoft Office, Microsoft Teams, One Drive cloud services and others that it sells together or pre-installs to customers in consumer and federal markets. This could give rivals to Microsoft Teams like Zoom and Slack more of a chance to compete for consumers and federal contracts.

Smith has been unclear and noncommittal regarding Microsoft’s stance on the AICOA, telling Geekwire in June that “We’re not trying to lobby in favor of the bill. But that doesn’t mean we’re opposing it either.”

The bill provides a big boost to tech critics and anti-monopolists by creating new rules of the road for Big Tech platforms such as Facebook, Google, Microsoft, and Amazon.

“If Microsoft is being wishy washy about the bill, it probably means they’re opposed to it for some reason or the other,” a source familiar with the meeting said.

Microsoft has avoided much of the antitrust scrutiny from Congress, federal agencies, and the public in the past two years while supporting some of the antitrust bills that would hurt Apple, Amazon, Facebook, and Google which has angered Microsoft’s fellow tech giants.

Some Republicans, like Rep. Jim Jordan of Ohio, the Ranking Member of the House Judiciary committee which regulates the tech industry, have even called for Microsoft to face the same antitrust scrutiny as other large tech platforms.

Sen. Schumer and Smith also discussed the Journalism Competition and Preservation Act, a bipartisan bill aimed at helping the news industry get better compensation for content posted on Big Tech platforms such as Google and Facebook, which Microsoft’s web portal and search engine compete with.

The two leaders also had conversations about online data privacy and regulations around it. Many tech giants have come under fire for their controversial data-gathering and usage practices that often secretly infringe on users’ privacy.

Democrats and Republicans favor establishing a national privacy standard to hold Big Tech companies more accountable for how they gather and use the data they collect but there is no consensus on how to do this within a comprehensive piece of legislation.

Microsoft’s pending acquisition of Activision Blizzard and related investments and jobs that could be created within the Capitol Region of New York was also discussed during the meeting, two people said. Schumer also pushed Microsoft to invest more in the video game industry of the region when he met with Smith in February of this year.

A spokesman for Sen. Schumer did not respond to request for comment. 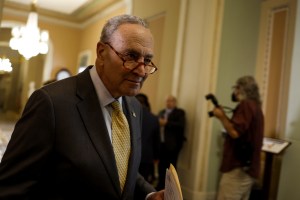