NASA wants to train its Mars terrain-classification algorithm to read the planet’s landscape better by inviting users to label geographic features in pictures taken by its rovers.

Already in use, SPOC automatically generates terrain labels, which saves rover planners time they can devote to mission science like deciding which Martian rocks to study next. But the algorithm needs refining.

“Typically, hundreds of thousands of examples are needed to train a deep-learning algorithm,” said Hiro Ono, artificial intelligence researcher at JPL, in a statement. “Algorithms for self-driving cars, for example, are trained with numerous images of roads, signs, traffic lights, pedestrians and other vehicles.”

NASA has compiled a public database of more than 8,000 Curiosity images in its online AI4Mars tool, so users can draw boundaries around terrain and provide one of four labels: sand, consolidated soil, bedrock and big rocks. Images from previous rovers Spirit and Opportunity may be added in the future.

Rover planners spend four to five hours planning Curiosity’s routes, a process that’s gone virtual during the coronavirus pandemic. Hundreds of lines of code must be written, so the rover avoids slipping, running into rocks or getting stuck in sand like its predecessors.

Planning also involves pointing the rover the right direction at the end of a drive so its high-gain antenna can receive signals from Earth to start the next one, as well as anticipating shadows that might interfere with its ability to determine distance.

Curiosity’s successor, the Perseverance rover, launches in the summer and will benefit from SPOC as well.

Engineers are translating AI4Mars into Spanish, Hindu and Japanese among other languages for added support.

“In the future, we hope this algorithm can become accurate enough to do other useful tasks, like predicting how likely a rover’s wheels are to slip on different surfaces,” Ono said. 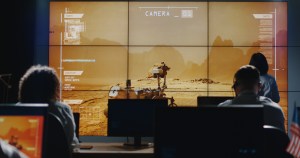