State Department CIO Front Wiggins has his hands in about only a third of the department’s total IT spend, he said. So to drive innovation at State, he’s leveraging his powers in the Federal IT Acquisition Reform Act to bring more of that budget under his authority.

“I have a direct authority of about $600 million, give or take, for an IT budget,” Wiggins said, and only 8 percent of that goes directly toward innovation, what he called “comprehensive change in the way people actually do their work.”

“The rest of it is for operations and maintenance, O&M,” he said. “That’s a horrible metric.”

Overall, the State Department spends around $1.9 billion on IT, he said Thursday at the SAP Digital Nation Summit produced by FedScoop. “So you can do that math, and figure out: ‘Wow, gee, a lot of that falls out of Frontis’ hands. What’s up with that?'”

Wiggins plans to use the power of FITARA to bring that spending back to the CIO’s office and prioritize it for innovative uses.

“If you want to get your hands around the finances to do innovation, you have to have visibility to that. So what we’ve done just in the last week or so is using the rubric of FITARA is call in all the other folks that do IT [in the department] … if you want to start doing innovation, we need seed money to do that,” he said, noting that State recently moved up in its grade on the recent FITARA Scorecard from a “D” to a “C.”

The 2014 law enhances federal CIOs’ budget authority and increases their accountability for that spending.

The State CIO’s Office is standing up a new Customer Requirements Office to meet with the personnel on the ground to determine what they want and build it.

Then the Customer Requirements Office will begin “ordering the requests so you actually can do some innovation ,and do it more quickly,” he added.

This will give State an opportunity to fail fast, prototyping innovative processes and technologies that are both scalable and sustainable. That’s key, Wiggins said.

“You get these great flash-in-the-pan ideas, they live for a year, but then the funding goes away or the business driver for it changes and it dies on the vine,” he said at the summit. “And then you’re back churning through that. … The main thing is to get the maximum bang for the buck, I want to find things from the get-go that are going to be scalable and sustainable and have maximum impact on a large customer base.”

There are more than 100,000 personnel in 260 locations worldwide that the CIO’s office serves, making it crucial for anything Wiggins’ team produces to serve the entire enterprise.

“These things have to work in Djibouti, Burundi,” he said. “They can’t just work in Paris or London. They have to be able to work worldwide.”

And Wiggins isn’t afraid to steal ideas if they’re good.

“We’re looking right now across the federal workspace to find out what innovative ideas are being done by other agencies and if there’s a good idea we’re going to steal it, we’re going to advertise it and we’re all going to copy it,” he said. 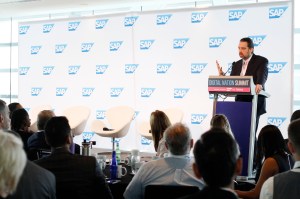