The coronavirus pandemic forced the State Department to get faster at putting productivity and collaboration tools in the hands of employees so they could do crucial work like preparing response plans to global events, CIO Stuart McGuigan said Wednesday.

The department’s Bureau of Information Resource Management had to adjust to delivering, in many cases, the minimum viable product needed so people could work, McGuigan said. Although the department is used to networking its facilities around the globe, setting up tools for teleworking employees was a new challenge.

State had spent the months prior to the pandemic ensuring its entire staff had cloud access, so many core communications capabilities were already in place. But adding a layer of “scores of applications” was another process entirely, McGuigan said during the AFCEA Bethesda 2020 Tech Summit.

“We had this existential demand that the longer we took to provide access to these applications, the longer people were unable to work at all,” he said.

One of those apps was Microsoft Teams, which employees quickly embraced once it was deployed, McGuigan said. Collaborative software has allowed remote workers with the department’s new Center for Analytics to model emerging events irrespective of where employees are located, McGuigan said.

At the height of the pandemic, the State Department was responsible for ensuring U.S. citizens abroad made it home safely as airports closed and flights were constantly being adjusted. The department needed real-time information and machine-learning algorithms more than ever.

“I see more and more opportunity, as a result of becoming more digitally enabled, to have diplomacy move at the speed of technology,” McGuigan said. “And that’s a really exciting byproduct to what we’re doing.”

The Center for Analytics predicts the likelihood of events like diplomatic unrest by convening a task force of its experts remotely to model potential scenarios. That way the State Department already has a response planned when an event actually happens.

McGuigan intends for the resulting culture change at the department to stick long after the pandemic resolves. His comments Wednesday come as State Department officials have spoken publicly about other lessons learned from the pandemic, including the need to improve enterprise data management.

“The ability to dynamically form a team, share information, share analytics, make a decision, and then execute is something we want to continue,” McGuigan said. 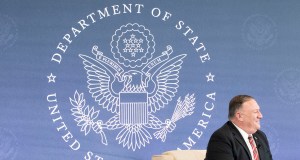