The State Department’s lead cyber diplomat for the past six years, Chris Painter, is leaving the department at the end of this month, CyberScoop has learned.

At State, Painter led the United States’ cybersecurity diplomatic efforts, including representing the U.S. in bilateral meetings around the globe. He was first appointed as the department’s coordinator for cyber issues by then-Secretary Hillary Clinton in 2011.

As CyberScoop’s Patrick O’Neill reports, prior to Painter’s work in the State Department, he served in the White House for two years as the senior director for cybersecurity at the National Security Council. That was preceded by 19 years at the Department of Justice under Presidents George W. Bush, Bill Clinton and George H.W. Bush.

With Painter leaving, Secretary of State Rex Tillerson is considering closing the department’s Office of the Coordinator for Cyber Issues, according to Politico. 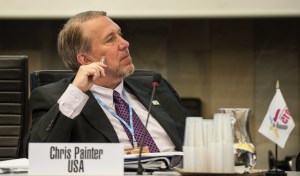