Steve Rice is stepping down as deputy CIO of the Department of Homeland Security.

Rice, who has been with DHS since early 2017, will leave the department July 19 to take over as deputy CIO of Navy Federal Credit Union, a DHS spokesperson confirmed.

“The Department thanks Mr. Rice for his significant contributions to its Information Technology modernization initiatives and wishes him every success in his future endeavors,” the spokesperson said in an email.

No replacement has been named.

During his time with DHS, Rice focused on the consolidation of the department’s IT, security and modernization. At CyberTalks 2018, he spoke with FedScoop about how the federal workforce is changing. He took over as acting CIO for a stint after Richard Starapoli suddenly stepped down after three months on the job in mid-2017.

Rice also spent several years at DHS as the CIO of the Transportation Security Administration.

He joins Vienna, Virginia-based Navy Federal as the organization recently promoted Anthony Gallardy to the CIO, leaving a vacancy at deputy CIO. 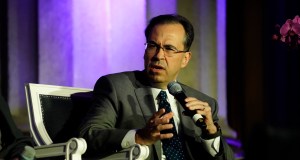