Suzette Kent experienced the incongruity of how federal IT modernization projects are funded — in short bursts rather than multiple years — firsthand during her two-year tenure as Federal CIO. In an interview with FedScoop a month after leaving the role, she explained how trying to fit large-scale, multi-year modernization projects into one-year budget cycles can often lead to the short-changing of true digital transformation.

“It is a fact that most technology projects take more than a year. And they certainly take more time to execute in the government perspective, when you look at the timeframe for acquisition, and all the things that you have to do along the path of a project,” even for something simple, Kent said.

But it can be tricky balancing the triad of federal agencies as mission owners, the Office of Management and Budget as the government’s financial planner and the congressional appropriators who hold the purse strings. In its current shape, that relationship is often out of sync in defining and measuring IT modernization, and how to fund it.

“If we’re really going to be transformational and looking at how we use technology to serve citizens, that involves business process change,” Kent said. “So that means not just significant changes in technology, but redesigning the process, it means you have to retrain the workforce. That means you have to go through the adoption process and a more comprehensive end-to-end process. All of those things take a longer time than a single fiscal calendar year.”

The agencies, OMB, Congress — “they all have a role and they need to be on the same page if we’re going to significantly move the needle,” Kent said.

Multi-year funding already exists in some places across government, like the Department of Defense, Kent explained. But for IT projects, it would require a different kind of education for Congress, with the private sector’s practices in mind.

“They should understand what that long term vision is and make certain kinds of intentional commitments to what a project may look like year-over-year,” Kent said of appropriators. “They do it in the DOD, right? If we’re building an aircraft carrier or something like that, they know that’s a multi-year project. We don’t treat some of our other things in that same manner.”

The education involves looking at “elements of transformation, that business process, training and retraining — the hands-on activities for ensuring the skills of the workforce that supporting certain applications — and a commitment to ongoing R&D,” Kent said, referencing parts of transformation that are often an afterthought. “Maybe we start thinking about those as part of our operational costs … we think of them as a mandate so that we’re funding them intentionally and they’re not getting cut.” But all too often, those vitally important pieces are trimmed off in negotiations on Capitol Hill, something Kent called “very frustrating.”

“We have an opportunity when we think about multi-year funding and pathways to get there that we can reconsider what we put in those categories — for transparency, for better gauging of outcomes, but also for more discipline, and how we fund so that we’re ensuring that we’re funding all the holistic set of activities that are required for successful implementation,” she said.

Now that she’s left government, Kent said she believes Deputy Federal CIO Maria Roat is poised to keep moving things in the right direction. “Maria has one of the best success records at end-to-end agency modernization — she is both a champion and now in a position to help continue to accelerate and remove barriers.”

The Technology Modernization Fund is another tool agencies could use to fund meaningful transformation projects — but not when it’s replenished at a rate of $25 million annually.

The officials with the original idea for the TMF envisioned a starting fund of $3 billion to support the most pressing IT modernization projects around the federal government, which agencies would then pay back within five years. But since then, appropriators have continually trimmed that number down, and altogether, the fund has only received $150 million since it launched. For fiscal 2020, appropriators almost zeroed it out before adding a mere $25 million to the fund for a second straight year.

Many lawmakers have, however, rallied around the TMF during the pandemic as a tool to bolster the federal systems and services that have been most stressed during the crisis, lobbying for a multi-billion-dollar emergency injection into the central fund.

Kent said the TMF works, but “it’s not at the scale that we need.”

“When you look at $25 million, I am not diminishing the importance of $25 million, but in a government initiative that impacts something that serves all citizens of the United States, that number doesn’t give you the opportunity to do very many projects,” she said. “When you look at the size of major investments on the IT dashboard, you can pretty quickly get your head around the fact that $25 million isn’t going to go very far. It was originally envisioned with more, and more was asked for.”

The payback requirement also restricts the type of projects that make sense for the fund, Kent said, suggesting it would be a good idea to consider waiving that requirement for some applicants. While some IT modernization does in fact generate quick savings that can be paid back to the fund as required, much of the work the government could and should be prioritizing to really move the needle forward won’t see those kinds of returns, she said.

“This becomes the question of are we really trying to drive faster modernization? Or are we just trying to pick off the components of projects that have a payback, and front load those?” Kent said. “Because the things where we are significantly improving, let’s say, the customer experience, or that it’s not already carrying the big baggage of legacy operations, the payback may be harder to consider.”

She continued: “How do I take the value of 30% fewer errors in customer service? How do I as a project manager work with the CFO to figure out what the value of that is and turn it into a hardcore payment that I give back to the TMF office? What does that look like in a government environment? In a private sector environment, they actually attach a financial value to customer satisfaction. In a private sector environment, you can make changes in your operational footprint and your people footprint because of your business. Those are not levers that are easily pulled inside the federal government.”

The TMF as-is isn’t outright problematic, Kent said. “The model is good and we’re probably at a place where we can still find lots of projects that meet those criteria. But if we want to use it as a lever to continue to drive big, bold, faster modernization, and there’s substantially more funds available, we should reconsider some of the payback mechanisms and the structures that that creates.”

Regardless of the level of funding (Kent herself didn’t give a specific figure at which she thinks it should be funded), the importance of the TMF and other modernization initiatives across government are to emphasize “reconsidering the entire process — that’s the big prize,” Kent said.

“I actually think if we just get off old technology and move to the next new shiny technology, and we don’t take time to rethink the business process, we’re actually cheating ourselves out of some of the value,” she said. “We don’t want to continue to recreate a process that was founded in laws and in concepts of the 1960s. We’re not there now. And we’re not serving citizens who are happy with those kinds of services.” 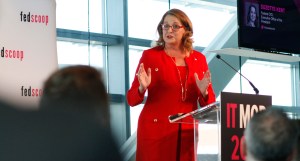