So you don’t want to run for office or join the military, but you do want to serve your country. What do you do?

Three former Presidential Innovation Fellows this week pointed to the PIF program as the perfect entry point for techies and other creative types looking to give back to Uncle Sam.

For Ross Dakin, a West Coast computer engineer by training with experience at a variety of startups, “It represented an opportunity to do something for my country that didn’t involve shooting guns or kissing babies,” he said.

The fellowship began in 2012 under President Obama and was made permanent this January by the TALENT Act, one of the last pieces of legislation Obama signed. The PIF website indicates that the application period for 2017 fellows closed in December 2016, but it doesn’t identify the fellows who were chosen for that cohort.

Dakin and two other former PIFs — Ashley Jablow and Jacqueline Kazil — sat on a panel at the George Washington University’s Graduate School of Political Management on Tuesday evening and shared what inspired them to join the program. While all three spoke from a similar perspective, they had distinctly different experiences of their “PIFdom,” as Kazil calls it.

Dakin was a 2015 PIF, and during his year-long tour of duty he worked at the Department of Housing and Urban Development, the Census Bureau and the Department of Agriculture. Jablow, a 2014 PIF, took the tour twice — one year at the National Archives and Records Administration, and another at the Environmental Protection Agency. And Kazil, finally, was a 2013 PIF who worked at the Federal Emergency Management Agency and went on to co-found 18F.

All came from different backgrounds too — Dakin a private sector engineer, Kazil from time building news apps at the Washington Post and Jablow from a grounding in the nonprofit world.

And yet the PIF opportunity spoke to all those backgrounds. “It offered an opportunity to use what I know how to do, no matter how niche it seemed,” Jablow said.

For Kazil, the one-year term was both attractive and a little scary. Having a limit on her time in government suited her, but what would she do for work at the end of that year? The answer, it turns out,  for all three is that they have returned to the private sector now that their government immersion is over. Still, they all think fondly about what working in government taught them.

Kazil learned that she is driven by mission — she looked for a mission she could connect with before taking her current job at Capital One. And for Dakin, who came a long way east for the PIF experience, “my biggest takeaway is was that government is just people,” he said. “There’s not the government and then other people … the government is just us.” 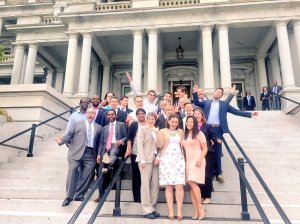