The Department of Veterans Affairs continues to face issues as it rolls out its modernized electronic health record (EHR) system, with veterans allegedly bearing the brunt for the changes, according to one concerned lawmaker.

The allegations come after the VA was warned by the Government Accountability Office instructed the VA to stop the rollout beyond the initial launch site in Spokane, Washington, and warned of system failure without fixes.

“I am hearing an increasing number of complaints and pleas for help coming into my Spokane and Coalville offices,” McMorris Rodgers, who represents the district where the first EHR iteration was launched at the Mann-Grandstaff VA hospital. “I am getting reports of veterans not receiving their prescriptions when needed or receiving the wrong prescriptions.”

The EHR modernization project falls under a $16 billion program to migrate veterans’ medical records to a Cerner-built cloud system and launch all-new user and patient interfaces. Several GAO and inspector general reports have warned about issues in the system’s rollout, which was twice paused before launching in October. The goal is to eventually link the system with the military’s similar modernized platform to allow for a smooth transition for retiring service members.

The VA says it is aware of the issues raised by Rep. Rodgers and says it has already begun to address the issues.

“VA was aware of the issues raised by the Congresswoman,” the VA told FedScoop. “For example, VA identified areas where Veterans in the Greater Spokane area needed additional education and communication resources to successfully use their new patient portal.”

McMorris Rodgers says one issue is patients’ difficulty using the Cerner patient portal, claiming that it only runs on Microsoft browsers and is leading to confusion. She said patients would rather use the My HealtheVet app, which she said is discontinued. The VA, though, said My HealtheVet was “not disabled,” but for those looking to fill prescriptions at the Mann-Grandstaff hospital, they need to use a new patient care portal called My VA Health.

The VA said that 12,844 veterans have signed up for the new My VA Health patient portal, completing requests for over 29,000 medication refills. The VA told FedScoop it set up educational resources for veterans confused by the transition, “which included internal call scripts, a most frequently asked questions website with step-by-step instructions, multiple Veteran emails and other educational resources.”

“The combined efforts of VA and Cerner Corp. are focused on improving the new portal, making it more Veteran-friendly and easy to access,” the VA said in a statement.

The congresswoman’s letter also cites staff shortfalls and a lack of support. Even though the VA surged additional staffing to the Mann-Grandstaff hospital to help as nurses and doctors learned the new system, the additional personnel has “all but evaporated,” she wrote. The result has been nurses “driven to tears because software, which was intended to be an improvement, makes their jobs more difficult.” The stress has driven a spike in turnover, reaching 60 percent in 2020, the letter claims. 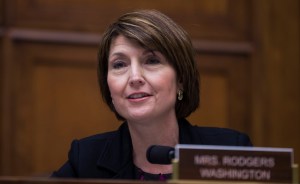