A soon-to-be-published inspector general report found several critical IT infrastructure problems and training issues that could cause “cascading failures” in the migration of the Department of Veteran Affairs to a modernized electronic health record (EHR) system if not addressed.

The two-part report’s main finding is that a VA hospital in Spokane, Washington, “lacks adequate staffing” to minimize patients losing access to care as it transitions to the new EHR system, replacing the outdated Veterans Information Systems Architecture (VistA). The VA center was set to go live later this month as the first to debut new EHR systems, but that schedule was “unrealistic,” according to the OIG report.

On top of that, failures to prepare VA’s larger IT infrastructure and adequately train for the new system has caused the VA to push the EHR’s launch date back to July.

Case said “critical physical and IT infrastructure upgrades have not been completed” at the  Mann-Grandstaff VA Medical Center in Spokane “in line with VA’s own timelines.”

Despite VA Sectary Robert Wilkie saying he is spending “millions and millions” of dollars building IT closets, the IG report found many of the contracts for the critical IT infrastructure upgrades have not been awarded. Much of the work to buy and install cooling devices, cabling and new laptops for staff at the center had not been done, according to the report.

Lawmakers were concerned by this. “I just feel like we are shooting ourselves in the foot,” Rep. Susie Lee, D-Nev., said of the report’s portrayal of the IT infrastructure upgrades.

The report also found a variety of staffing and training issues in the EHR’s rollout. The current staffing level for “mitigation personnel” — additional staff to offset and augment productivity loss during the focused effort to bring the system online — is below 50 percent. However, the VA is optimistic it will reach 90 percent of the 108 people it hopes to hire by the new launch date in July. The department will also send 24 traveling nurses to the Spokane center to assuage transition challenges this summer.

On top of that, training couldn’t proceed in anticipation of the original March launch goal because the system was behind in its development. Only 19 of the 73 new interfaces clinical workers need to use had been programmed. Likewise, training for so-called “superusers” showed negative feedback on how the system worked.

Now with an extra four months, the VA will be able to program more interfaces, such as online prescription refilling, telehealth and travel reimbursement portals, said Richard Stone, director of the Veterans Health Administration.

A new round of training on an updated “snapshot” of the system is set to begin in early April, John Windom, director of the Office of Electronic Health Record Modernization, told lawmakers Thursday. While the system that doctors, nurses and other providers will train on will be updated from its current state, it still won’t be the final product. That’s because end-users need a stable training system that doesn’t face the interruption of constant updates, Windom said.

The initial EHR delay — announced in February soon after the firing of then-Deputy Secretary James Byrne, the accountable official overseeing the development of the platform — caught many in Congress by surprise. Lawmakers remain wary of the VA’s transparency and its ability to meet its new July deadline.

“What we do ask of the VA is to be open in your communication,” Chairman Mark Takano, D-Calif., told FedScoop after the hearing. “I am not going to let (the VA) off the hook.”

Takano added that he has not received any word on an acting deputy secretary to replace Byrne being named. Wilkie told FedScoop in late February that he has replaced Byrne as the one accountable for the project.

Takano urged Wilkie to name a replacement soon. “By law that is who is responsible for all of this,” Takano said of the deputy secretary position Byrne vacated. “They need to have someone in that position, even if it is an acting.” 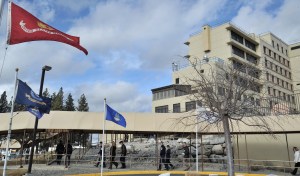