The Department of Veterans Affairs finished implementing major IT updates to more efficiently process education benefits after experiencing issues in recent years that kept some veterans from receiving their full GI Bill benefits.

The updates — completed at the end of October — come as a major component of the Harry W. Colmery Veterans Educational Assistance Act of 2017, also known as the Forever GI Bill. Essentially, the fix improves how the Veterans Benefits Administration interacts with veterans and allows for improved processing times, quick response to legislation and fewer manual workarounds, according to a VA press release from last week.

“These IT changes improve our ability to deliver education benefits to GI Bill students.” said VA Secretary Robert Wilkie. “As VA works to modernize processes, this milestone is an important step in our digital transformation journey — merging people, procedures and technology.”

The Forever GI Bill came under fire when it was first signed into law in 2017 and caused major IT disruption. The primary concern was a provision that changed how a monthly housing stipend was calculated, from using the zip code of where a veteran lived to that of where they go to school. This policy change resulted in a major backlog of claims to process, leaving some veterans without those benefits for months at a time.

The updates in the bill also removed benefit expirations for veterans who served after 2013, expanded eligibility for a program that covers private or graduate school and established a new STEM scholarship.

The VA ended up using $243 million of its $19.6 billion in coronavirus relief funding to support the implementation, officials said earlier this year. 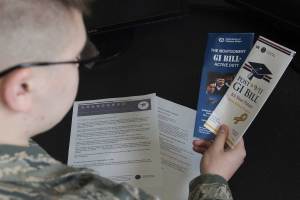