The nation is on the brink of launching an interoperable and modern national public safety network, a group of private and public tech thought leaders said Tuesday — but there’s still work to be done.

With the award of the First Responder Network Authority contract to AT&T earlier this spring, the framework to build a 21st century digital communications network for police, fire departments and other agencies is in place, panelists said Tuesday at AFCEA Bethesda’s Law Enforcement IT Day 2017.

“I think we’re there. Not today, but I think with this … landmark deal, I think it’s a true landscape changer, with this public-private partnership, I really believe that we’ve set the stage to have an interoperable nationwide backbone for this conversation,” said Jeffery King, FirstNet consultation area lead for the eastern U.S.

“It will take time to come to fruition… but the backbone’s there, the deal is there,” King said.

The next milestone for the project will come early June, when the agency will release its state draft plan. Details of the network, like its cost, will become available to states for the first time.

Others at Tuesday’s event rationalized that there’s a need to use other modern, software-driven technologies atop the FirstNet framework for it to prove successful.

“I fundamentally believe the answer is in software — you look at where the entire world is going and the fact that all this communication is going digital,” Department of Homeland Security CTO Michael Hermus said. “At the end of the day, how do we ensure interoperability? We rely on sound architectural principles as we’re building the backend for these software systems so they can communicate properly.”

For instance, with software-defined networking and cloud technologies, “The ability to scale up and scale down as you have an incident or an event or a disaster to be able to control technology and use it, have it more in the hands of the end user, is powerful,” said Stacy Schwartz, vice president of federal public safety for AT&T. “And that’s real — that’s in progress. We are developing that today.”

Hermus also pointed to “the API economy” as a guidepost for continuous innovation with a foundation in interoperability.

“It’s not a problem that’s insolvable these days,” he said. “If we rely on the same principles as we’re assembling the backend for communications infrastructure as it goes digital, I think we will get there quicker.”

No stranger to the struggle to build IT infrastructure for first responders, acting U.S. CIO and former DHS principal deputy CIO Margie Graves said “we’re closer than we’ve ever been before” to achieving a viable solution.

“We’ve struggled with a couple of issues along the way,” Graves said. “But we’ve got FirstNet in place, we’re rationalizing our spectrum, we have all of the standards we’re trying to put on board.”

But she didn’t stop there — Graves’ North Star for a public safety network is truly something out of a sci-fi movie, using artificial intelligence and machine learning.

“It’s almost like pre-cognition: being able to stop things before they happen in a more appropriate way, so that you’re not actually even having an incident in the first place,” she explained. “If we can get to the point where we’re using our communications and our applications and our data analysis to do that, and then putting the smart minds of our law enforcement officers who have their instincts and their ability to work on the street and in the field and apply them in the middle of that — that’s the future that I look forward to.” 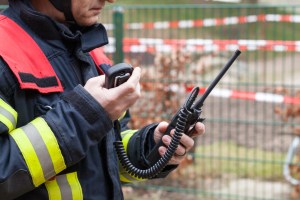 Are we there yet? How close is the U.S. to a modern, interoperable public safety network?