The leaders in the Air Force’s technology office used to keep Fridays clear so they could visit vendors for demonstrations of new IT tools. Now, vendors are only a video call away, any day of the week.

Air Force Deputy Chief Information Technology Officer Rob Beutel said the coronavirus pandemic has changed the way the service does business by allowing more interaction with industry — and hopefully, it will stay that way.

Before the pandemic, Beutel and others would leave the Pentagon on Fridays to avoid the troubles of setting up meetings and trying to launch a demo on the DOD’s networks — which is much more difficult than on the public internet. If vendors did come to him, often network constraints caused presentations to be scaled down to a slide deck and descriptions of the products or services. Beutel said it was never a full substitute for seeing what the technology could do.

“Now, on a daily basis we can meet with [any] company,” he said Thursday during a GovLoop webinar on impacts of the pandemic.

In-person visits also limited Beutel and his team to technology companies in the Washington D.C. area. For two weeks out of the year, his team would travel to Silicon Valley for demonstrations. Now, he can check out the latest-and-greatest products at any time of the year with a video call, saving both time and money in the process.

Despite a lack of face-to-face interaction and the added connection that comes with it, he said he still gets a detailed understanding of the technology.

“We are seeing real demos of their products,” Beutel said.

There have also been increased virtual interactions with academic and research institutions. Livestreamed conferences and events have eliminated the need for a government-funded trip to campuses.

Beutel has been with the Air Force since May 2019. He came from U.S. Transportation Command where he led IT service management. One of the biggest initial challenges he faced when the pandemic struck less than a year into his tenure was getting enough laptops to airmen and civilians working around the world. Scaling up virtual private network use and educating users on cybersecurity best practices took a great deal of time. And a large hurdle still remains in transforming ingrained work culture and practices that prioritize working in the office.

“People are starting to get it,” Beutel said. 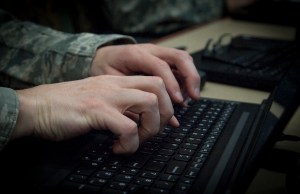