The Air Force inked $67 million in deals to scale out its virtual training, giving airmen new avenues to train using and maintaining aircraft and other systems, particularly as the military continues to social distance during the ongoing pandemic.

The contracts with Mass Virtual will promote “aircraft familiarization” and “real-time task manual instruction,” according to a release about the contract.

“The system simulates real workspaces for occupational safety and health, educational and training purposes. It will be used to provide aircraft maintainers with a virtual environment where they can develop and improve their skills on various aircraft platforms,” the contract release states.

While it appears Mass Virtual’s contracts are more focused on giving airmen more familiarity with what’s under the hood of an aircraft, Air Force leadership recently touted an increased reliance on VR training and augmented reality simulators as a means to give pilots hands-on, simulated virtual training. Those systems often rely on large data sets of flight simulations and some are even powered by artificial intelligence to give pilots realistic training environments.

The Air Force is working on a new virtual training system, Pilot Training Next, which is being incorporated into undergraduate pilot training. The department also had a simulator for B-52 Stratofortress bombers in the final stages of testing this summer, according to the Air Force.

This helps “students stay on track with extended breaks due to things like weather, maintenance, transitioning to new phases or even holidays” — or, you know, global pandemics — according to another Air Force release on uses for virtual reality training. 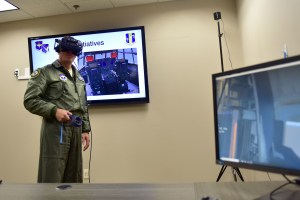