By the numbers, the Air Force’s inaugural Small Business Innovation Research Pitch Day seems to have gone according to plan — more contracts were awarded more quickly to more companies without a history of government contracting. The two day event took place in New York City on March 6-7.

But Ryan Helbach, chief intrapreneur at the Air Force Research Laboratory, told FedScoop the event was more than just the sum of the contracts granted. “I’ve never been to an event like that that had so much energy,” he said in a recent interview.

The stats: After an application and selection process, a total 59 companies were invited to pitch 60 solutions. Of these, 26 companies had never received a Department of Defense contract before, representing “exactly” the kind of companies the Air Force was hoping to lure in with this SBIR-in-a-day opportunity, Helbach said.

In the end, the Air Force awarded 51 contracts, paying out up to $158,000 to each company on the spot. Helbach said this seemingly high success rate doesn’t surprise him, because the 59 companies invited to pitch had already been selected out of a group of around 400 applicants. “These were already the top of the crowd,” he said.

Of course, no experimental event can go off completely without a hitch, and the pitch day was no exception. The issue that made everyone most nervous? Purchase card fraud alerts.

“We were spending so much money with a credit card — we kinda jokingly said we were spending it in Times Square and what’s the Air Force doing and stuff,” Helbach said. Thankfully, there was a bank representative on hand to help resolve these issues. “We worked through it,” Helbach said. “We were able to pay all the companies there and then.”

Moving forward, the Air Force will track the progress of each contract recipient as they go through a five-month customer discovery sprint. Helbach expects they’ll then down-select again, moving only the most promising solutions into phase two of the SBIR process.

But he also says the Air Force, and perhaps other branches of the military, will host more pitch days in the future. “I look at this as this is an excellent tool that we’ve added to our tool kit for engaging with entrepreneurs and with startups and small businesses,” Helbach said. “You’ll be hearing more.” 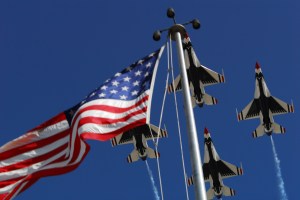