During her tenure as executive director of 18F, Angela Colter has done a lot of thinking about what makes a good 18F project.

What combination of factors adds up to an opportunity for 18F — the digital services consulting group situated within the General Services Administration‘s Technology Transformation Service, —to have its greatest impact? Ahead of her departure from the organization’s leadership role, Colter reflected on this question and more in a conversation with FedScoop.

18F‘s project “sweet spot,” she said, has a lot to do with the client’s mindset. From the beginning, Colter has set out to encourage 18F to work with agency clients, instead of just for them.

“We try to identify projects, kind of during the business development process, of agencies that are willing to [work with us],” she said. “Usually if a partner or a potential partner wants to have 18F just build something for [them], there’s usually better options.”

The group also likes to be involved upfront to help agency partners make sure any technology solution fits an actual problem.

“Sometimes we do get partners who already have a solution in mind,” she added. “And … what we tend to say is ‘we want to help you better understand what problem you’re trying to solve by using this technology.’ Because a lot of times agencies may self-diagnose … when they may or may not have looked more deeply at: OK well what is the problem and is this thing that I’m choosing going to solve that?”

Thus the early stage of user research, prototyping and user feedback has proven to be “a successful place for us to provide value,” Colter told FedScoop. From there, she said, 18F likes to hand off a project to the agency itself or, often, to a vendor.

Why this particular niche?

For one, Colter says, that’s where her staff has lots of experience. And, at just around 100 employees, 18F isn’t set up to work on long-term operations and maintenance.

It’s also true that finding a niche that is valuable to paying clients is an existential imperative for 18F. The organization is designed to be cost-recoverable, a goal it has been working toward since its founding in 2014.

“When I came into the role, one of the big concerns was cost recovery and, you know, is this really a viable business model,” Colter said. But 2019, and a recent work to “professionalize” the group, has given her faith.

“We had a really good year in fiscal year 2019,” she said. “We came really close to cost recovery, and we estimate that if not for the government shutdown we would have been cost-recoverable. To me, that was kind of the main highlight of the last year, because previous to that it had been kind of an open question as to whether this was a viable business model. And I think we can sort of put that one to bed.”

Colter’s last day at GSA is Friday, she said she’ll be taking some time off before deciding what comes next. 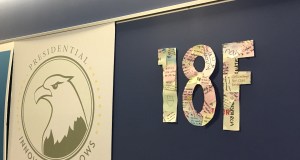 Outgoing director Angela Colter reflects on her highlights with 18F