The U.S. Army Reserve recently introduced its first general to oversee its cybersecurity.

Newly promoted Brig. Gen. Robert Powell will serve as a deputy commanding general of cyber for the 335th Signal Command, specializing in overseeing the unit’s cyber activities, according to a news release from the Army. Powell has a long history in the Army Signal Corps and cyber-related units, most recently commanding the U.S. Army Reserve Cyber Protection Brigade from 2016 to 2019.

The military has seen its reserve components’ cyber capabilities as one option to enhance cyber-readiness, hoping to lean on members of the military who have left full-time service but can still offer their technical expertise as reservists. The Marine Corps also recently announced plans for more reserve units focused on network security.

“[Powell] is the first United States Army Reserve General Officer to come from the cyber branch,” said Maj. Gen. Stephen Hager, who led Powell’s promotion ceremony in December. “That is significant since it demonstrates to our younger troops that there is a path to general officership.”

Many of the military’s highest-ranking generals come from combat roles — less often from IT or cyber. In a recent opinion piece, the former chief learning officer of the Navy criticized the over-representation of combat officers in the upper echelons of the military, saying it posed a threat to the effectiveness and cybersecurity of the armed forces.

In a speech during his promotion ceremony, Powell stressed the importance for general officers to have cyber experience as the Army puts greater emphasis on cybersecurity operations and information warfare.

“It was very evident in my time at Fort Meade that information warfare is growing in complexity, and we must continue to move in a direction to address these challenges,” Powell said during the ceremony.

Being a general in the Army Reserve is a major achievement in its own right, with only 130 currently serving at that level.

“The jump from colonel to flag officer is a very competitive endeavor,” Hager said. 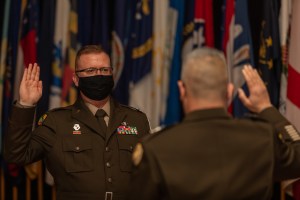