Longtime federal IT leader Bobby Saxon has taken a role with Leidos, departing the Centers for Medicare and Medicaid Services after six years of service.

Writing in a farewell message announcing the new job on social media, Saxon said he has accepted a vice president role with Leidos focused on customer advocacy.

Saxon served at CMS most recently as deputy director of its Office of Information Technology and deputy CIO. Before that, he held several other roles at CMS, including as chief technology officer for Healthcare.gov — in which he helped improve the performance of the program’s website and systems with little downtime during its fifth open enrollment period — and as the acting director for emergency preparedness and response operations during the height of the COVID-19 pandemic.

At FedTalks in August, Saxon spoke about the work his office, led by CIO Rajiv Uppal, is doing to modernize legacy IT systems, saying that CMS has “more than a “half a dozen or so mainframes” that provide critical services for the American public and could be up for modernization in the near future.

“Medicare, for example — sixty-something million people are dependent upon our mainframes functioning the way we want them to function,” he said. “They do function well, which is why we’re still on them,” Saxon added, noting that this is in part because the agency is “somewhat risk averse” culturally.

He added: “Our teams are the ones that are pushing back [on proposed changes] because it does function on a daily basis, it does deliver that capability. And our challenge is to figure out how we can get past their concerns with risk to get to a place where we can see ourselves that 10 years down the road.”

A retired Army colonel, Saxon has more than 30 years of IT leadership experience and is a combat veteran. He also served the Department of the Army as assistant deputy CIO for operations and plans.

Saxon was a 2022 FedScoop 50 award winner in the Federal Leadership category. 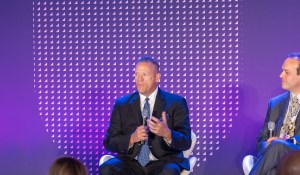