The Army’s technology for monitoring terrorism threats has been adapted for real-time tracking of the spread of the coronavirus, according to officials who work on the project.

The new use for the Joint Analytic Real-time Virtual Information Sharing System (JARVISS) fits its mission of helping to keep Army personnel safe to ensure readiness, says Jeff Kahler, a program manager for JARVISS at Everbridge, the main contractor that supports the system.

“The way that JARVISS was designed was to be an open platform where any threat to the Army or to the U.S. globally could be brought into the system and analyzed,” Kahler told FedScoop. “With COVID-19 that obviously was another threat that required a little bit of change.”

The system’s common operating picture has been used in decisions to close Army facilities in early hotspots like Southern California, officials said.

Originally created in 2018 in response to base shootings like the one at Fort Hood, Texas, the system pulls data from an open-source collection of information supported by Everbridge, a company that primarily works on emergency mass communications. (The project’s name is a nod to J.A.R.V.I.S., the artificial intelligence system that aids the fictional superhero Iron Man.)

The new COVID-19 data layers compile open-source information about the spread of the illness, like news articles and data from health organizations. That data is fed into a real-time, coronavirus-specific dashboard for commanders.

“This is really looking at stuff that might disrupt operations holistically,” said James Allen, the Army’s program manger for JARVISS.

Data synthesis was built into the core of the JARVISS system, so it only needed the new data layers to monitor coronavirus-specific information. JARVISS already had tracked biological hazards, but was not fully prepared for the global pandemic. Other government agencies have struggled in building public data portals to surveil the spread of the virus.

“We were extremely well-positioned when coronavirus came about,” Steve Gardner, a technical account manager for JARVISS who works for Everbridge, told FedScoop.

Allen has been with JARVISS from the beginning and has watched it grow to being used in more than 70 countries. Allen said he is particularly proud of how the system updated units in New York about stay-at-home orders and other information from hotspots across the state.

Soon after the virus started spreading in China and East Asia, Allen approached Everbridge to ensure the system could track the virus. The company was already at work updating its open-source data gathering, he said.

“When this desire for information related to this was presented to [Everbridge], they were actually already thinking on it and working on it,” Allen said.

The system was built by the Army, but other services are using it as well. The National Guard, which has tens of thousands of guardsmen deployed in all 50 states, has used the system and federal agencies responding to the crisis have also taken advantage of its tracking abilities, Allen said.

“We designed JARVISS with the J in there to be a joint system,” Allen said. 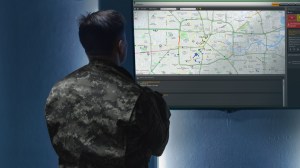 New job for JARVISS: Coronavirus tracking for the Army