The limited amount of publicly available real-time data on the impact of COVID-19 has raised questions on the federal government’s handling of critical information at a time when the public and other institutions depend on it to stop the virus’ spread.

Experts say up-to-date information on areas such as testing, infection rates, details on deaths and hospital capacity is critical to understanding the impact of the virus and responding to it. On April 9 the Centers for Decease Control and Prevention opened public access to new tools it is using to track some of these data points, but its reporting is weeks old and often differs from academic and private efforts to surveil the disease.

The lack of transparency for months after the disease first came to the U.S. has clouded views on how the government is collecting data from hospitals and state and local governments.

“People need to understand what is happening,” Alex Howard, director of the Digital Democracy Project at Demand Progress, said about the importance of data transparency and communication during a crisis. The goal should be “arming the public with knowledge,” he said, stressing that quality public information is one of the most critical parts of combatting a pandemic.

Leaders in government have echoed Howard’s message. But so far only limited data is available through easy-to-access public avenues, such as the CDC’s daily U.S. at a Glance tool and other data summaries. Data experts and public health officials have said sharing more than just the number of positive cases and deaths is important to provide a clear, holistic picture of the situation.

Some states have filled the void with regular social media updates with a range of data points and information about how data is being used. Many activists and some lawmakers have urged states and the federal government to collect data with racial breakdowns.

Beyond the U.S. at a Glance portal, the CDC started releasing death statistics in April through the National Vital Statistics Program, which tracks mortality data in the National Health Statistics Center. However, the statistics lag weeks behind other counts. On April 14, the NHSC reported 6,930 deaths from COVID-19, while other tracking systems put the number over 23,000. This is because of a delay in the death certificate certification process, according to the website.

The CDC also has COVIDView, a version of the agency’s FluView, that releases a weekly summary of some data points. It does not include racial breakdowns, testing rates or the detailed “granular data” the White House Coronavirus Task Force says it works with. FedScoop reached out to the White House with questions on data governance but did not receive a response.

The collection of data from hospitals remains voluntary and appears to be segmented. Three months after the first case was announced, the White House requested hospitals voluntarily send data on a 13-point spreadsheet to a Federal Emergency Management Agency-related email so the government can monitor levels of personal protective equipment. The American Hospital Association confirmed that reporting was happening from individual hospital networks, not through the association or other groups.

Yan Chow, health care industry strategist for robotic process automation (RPA) company Automation Anywhere, added that hospitals have shown increased interest in RPA to help assist in the data population that is often manual and time-consuming. One of the CDC’s coronavirus-specific data forms has more than 200 fields hospitals have been asked to fill out daily, Chow said.

FedScoop reached out to several large hospital networks but did not receive comments on how they are reporting data.

The CDC also opened a new module March 27 for COVID-19-specific data to be reported to the National Health Safety Network, one of the largest networks for health data in the country, according to public documents from the agency.

Silicon Valley company Palantir is delivering its Foundry suite of tools to help the CDC “harmonize” the vast data set of incoming unclean data from hospitals, a source familiar with the matter told FedScoop. But in the footnotes of CDC-released data, it notes “all deaths with COVID-19 are manually coded” and many other influenza deaths also needed to be hand-typed into the CDC data networks.

The CDC operates vast data networks, from flu trackers to mortality statistics platforms, with some of its tools being converted for coronavirus-tracking. While it is not the only health agency that works with data, it is an agency without a top data expert. The CDC only recently posted a job opening for a chief data officer, a position that Colleen Thorndike, director of data solutions at Valid, says is critical in a time like this.

“By having someone at the leadership (level), they can really help find what is really needed,” Thorndike said.

That job posting is open through April 28, a sign of how long it might be before the agency is able to begin the actual hiring process for a CDO. The position is an excepted service position under Title 42, however, so the agency will be able to streamline some of the typical federal hiring actions.

Other agencies recently appointed their first CDOs after the passage of the Foundations for Evidenced-Based Policy Act required the new role to be filled by August 2019. The CDC was not required by the act to hire a CDO.

The position is designed to help the very type of situation health experts say is the government is in now: Finding the right ways to use data to inform decision-making.

Without data, and without data-leadership, agencies are left flying blind, Howard said.

“It is effectively blinding ourselves to the problem,” he added. 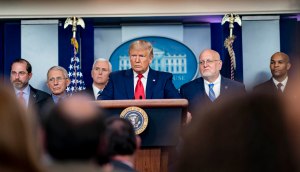