The Trump administration announced a variety of new cybersecurity jobs Wednesday tailored to graduates of the Federal Cybersecurity Reskilling Academy.

Ten short-term job descriptions have been posted to USAJobs.gov as opportunities for federal employees who’ve completed the reskilling program. So far, there are roles listed at the Department of Homeland Security, Environmental Protection Agency and Department of Veterans Affairs. Some of the listings are looking for multiple people to hire on an ongoing basis between 24 and 40 hours a week.

The effort, led by the Office of Management and Budget and Office of Personnel Management, comes as participants in the first reskilling cohorts have struggled to find cybersecurity roles. Though they’ve received training for critical-but-underfilled cybersecurity jobs, they’ve often don’t meet the basic requirements of the job listings, such as a traditional college degree.

“We’ve been very open with that we had an idea, we wanted to prove it, we proved the things we wanted to prove,” Federal CIO Suzette Kent said Wednesday at FedScoop’s IT Modernization Summit. “But what we learned from that experiment was we need more support in actually getting individuals into the roles.”

The new jobs “ensure that we can take the individuals who successfully came through this class and others and get them into those cyber roles so they have the experience to continue that path forward,” Kent said.

OPM Director Dale Cabaniss described the listings in a statement as a sort of “government-wide bulletin board for short-term assignments, details, and training opportunities” that will “help agencies tap into the valuable talent and skills we already have and are developing within government.”

On top of that, the administration has already made some progress placing “a third” of the cohort graduates in new roles or augmenting their current jobs to take advantage of their new cyber skills, Kent said.

Speaking about the administration’s continued efforts around the President’s Management Agenda, she emphasized the importance of the workforce to the federal government’s longstanding focus on IT modernization. Kent said these initiatives, such as the reskilling academy, “can’t be a short-term commitment.”

“How do we create ongoing commitment; not just a special project that has a sponsor, but something that becomes part of our DNA,” she said.

Kent also hinted that the Federal CIO Council is working on activities around data science reskilling that will take place over the summer, “building the skills that we need in that particular area.” 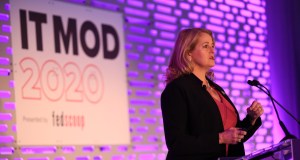