When the Pentagon chartered its digital services team — the Defense Digital Service — in 2015 as a branch of the White House’s U.S. Digital Service, the mission was simple: Embed the nation’s top tech talent within the Department of Defense for a brief tour of duty to rectify the military’s tech woes with an innovative and agile mindset.

While that core formula — calling on the nation’s brightest to serve and bring the Pentagon’s IT into the 21st century — is still there, in the five years since, DDS has matured and transformed. Today, DDS exists as more of a digital first-response force, often working hand-in-hand with service members on the operations side when the department faces a “fire” that requires tech help — these days, pretty much any major challenge in the national security space.

Perhaps the best and freshest example of this is the team’s many supporting roles during DOD’s response to COVID-19. It started with aiding the USS Teddy Roosevelt in Guam when the aircraft carrier experienced a widespread outbreak of the coronavirus and was ordered to stop its movement. The team created a symptom tracking app for the sailors on board to keep tabs on who had the virus and who had been exposed to stop the spread.

In between those “sentinel” efforts, as DDS Director Brett Goldstein described them, the team stayed busy with COVID-19 expanding the symptom tracking app department-wide, improving virtual hiring and onboarding during the pandemic, and supporting Navy medical ships by detecting and guarding against drones flying in their airspace.

“That’s when I realized that we had taken this team from being a generator of good ideas and good feedback to rapid response solution delivery — this vision of a SWAT team of nerds, but a SWAT team of nerds that delivers left and right,” Goldstein told FedScoop.

“I saw lots and lots of good ideas,” he said. “But we hadn’t really conquered the sustainable piece, or ensuring the outcome, or the commitment to stay with something when it went from sexy and shiny to kind of boring but still critical.”

Shortly thereafter, an old friend and colleague in Katie Olson joined him as deputy director of DDS, and the two began to consciously “sit down and…start to rethink where should this organization go,” he said. The two worked together for the City of Chicago about a decade ago.

Olson saw it too: “I think part of what we both immediately recognized is the stage DDS was in, it was a sort of a startup trying to move into steady-state operations.”

One thing was missing. Goldstein said he’d hear it over and over again when he joined during his initial meet and greets with DDS’s partners. “A theme that kept on coming up was, ‘You folks will come in for a tiny period of time, we’d hear about all the things that we’re doing wrong. But then wouldn’t know how to get to a better outcome.'” he said. “And this is something that really resonated with me because I don’t want to go around just telling people you’re doing it wrong. I want us to get it right.”

It’s not always immediately apparent what constitutes a project fit for today’s Defense Digital Service. It’s really an amalgamation of things, centering on a couple common threads. Most often, the team is called upon when “something horrible happens, like some critical system breaks, and no one else can fix it,” Goldstein said.

“I really do love the example of the USS Teddy Roosevelt [COVID-19 response]. Literally, it started with a phone call in my house,” he continued. “And 24 hours later we were delivering. I don’t know anyone else, any other technical component that can deliver like that.”

In addition to putting out those “fires,” DDS wants to be the team that thinks big, initiating “leapfrog” projects — things that dramatically move a technology or concept forward in a quick and actionable way.

“I think where we’ve landed in terms of the type of work we’ll do is we should be doing things that are giant leapfrogs, you know, things like [counter-unmanned aircraft systems],” said Olson. “On the other hand, we are there to be the department’s kind of crisis management group and to be solving fires.”

Cybersecurity is a leapfrog that keeps Goldstein up at night.

“Every night, I wake up in the middle of the night worried about cybersecurity, cyber capability, and our national security,” he said. “I am not interested in talking about 10-year plans. I’m interested in what are the things we can do to leapfrog a capability in that space and accelerate change and the application of that?”

So, DDS has expanded its cybersecurity work, beyond just the bug bounty success it’s had with Hack the Pentagon to take a more holistic approach to “help the department think about their cyber hygiene,” said Olson. Also, the team has created tools like Clone Wars that scans “see if any of our code is leaked out” and Crossfeed, a continuous monitoring tool that scans DOD’s public-facing assets for vulnerabilities.

Peppered between the leapfrogs and fires, DDS also takes on pilot projects, starting small with modern tech concepts that could be of great benefit to the wider department.

“We have moved to repeatable processes and projects that we can test out, instead of saying, you know, let’s get the entire department on one cloud,” Olson told FedScoop. “Looking at something like [what] the Air Force is doing with Cloud One or Platform One. Let’s shift people into this idea of developing and cloud architecture and scale up from there.”

This is a marked difference from the DDS of the past — the one that was responsible for developing the concept behind the Pentagon’s controversy-ridden $10 billion Joint Enterprise Defense Infrastructure (JEDI) contract to acquire a single, end-to-end cloud solution.

Ownership of JEDI was transferred to DOD’s Office of the CIO in 2018, and while this gave DDS more time to focus its attention on new projects, it also marked a natural point for some original team members, done with their work on this all-consuming program, to plan their exits.

Within a year after the transfer of JEDI, founding DDS Director Chris Lynch departed to start his own company, Rebellion Defense. Many of the Defense Digital Service’s early members followed Lynch to Rebellion, leaving the team with a slimmed-down staff when Goldstein arrived in mid-2019.

Around this time, DDS also gained independence from USDS. “Going back to the original conceptions behind USDS, the idea was to create organizations within the agencies that could be sustainable on their own,” Goldstein said. “So DDS has accomplished that.”

These moments together birthed an opportunity for Goldstein and Olson to build a hand-picked team from near-scratch.

“A lot of people were, I think, done with their time with DDS, either because their terms expired or they just had worked really hard on JEDI” and saw that as a natural conclusion, Olson said. “We had to immediately start rebuilding the team.”

But because of the fresh start, “we could recruit the skill sets that we felt were needed or missing,” she said, adding that more than 60 members have been brought on since then.

Typically, USDS led recruiting and hiring for DDS. But now the two were split, and it was up to DDS on its own to rebuild. Goldstein and Olson took the lead, and because of that, “I know everyone’s name. I know everyone’s story. I know their capability. I can say that Katie and I have screened every single person and can attest to their skills and their abilities,” Goldstein said. For this reason, he never wants the team to be much bigger than it is now at roughly 80 members.

They brought on new skillsets and a more diverse team focused on security engineering and data science, as those were strategic areas DDS hoped to expand its work in, Olson said. They also doubled down on “engineers, designers, and product managers, and what we used to call bureaucracy hackers, you know, people who are in the front office, who know their way around acquisitions and legal and communications and all of these important skillsets to help the team function.”

Even during the pandemic, DDS continued hiring when many DOD teams struggled to traverse the need to do so remotely. The team took the lessons learned from that and passed them on across the department in a toolkit for how to hire digital talent in this new environment, helping answer questions like “what was the experience like for people when they finally did start…making sure everybody had delivered laptops all over the country, and making sure that we still had good cyber hygiene.”

“The majority of the team at this point has onboarded in or around the pandemic,” Olson said. “There’s a good percentage of the team I’ve never met in person. It’s kind of wild.”

Goldstein doesn’t see this changing. DDS will continue to hire talent where it is, pandemic or not, he said, “because we go where the work is, and where the need is, and so on.”

The future of DDS

Under a new administration with a new secretary of Defense, the Defense Digital Service will undoubtedly continue to evolve. Likely, that will mean new focus areas in line with the DOD’s similarly evolving mission set.

Olson pointed to things like continued support in cybersecurity, public health response and, perhaps, climate change as areas the DOD could look to DDS for help.

“We have a lot of real estate and a lot of bases,” Olson said of the military’s role in climate change. “And it’s kind of interesting to think about bases being like small cities, and how can you pilot some things like renewables. But then we’re also a huge consumer of energy. And so I think there’s potential to make different choices to make a dent in that.”

For Goldstein, it’s all about staying in lockstep with Pentagon leadership “on what are the things that keep them up at night? What are the evolving threats that are exhibited in the [National Defense Strategy] and how do we ensure that we’re that technical component that is able to step in immediately, not with a one-year plan, not with a big vision, but there’s a need and we go and execute.”

He also values staying in lockstep with his deputy in Olson.

“At DDS, the way we structured it from day one is more of a partnership than the director and the deputy,” Goldstein said. “And that’s allowed us to grow and scale in ways that were potentially harder. She and I share critical decisions, we develop strategy together. And the beauty behind that is, when one of us is off on an operation out of the country, any of those pieces, the other is able to step in. I think this relationship has been critical to allowing us to double the organization in size, but also take on really, really critical missions. I think that’s been a cornerstone in our successful growth. And I’m really happy that she and I were able to collaborate again.”

Regardless of what the future might bring for DDS, one thing remains essential to the team’s mission, Goldstein said.  “There’s been a bit of acceptance that technology is going to be behind in government or this concept of ‘good enough for government work.’ None of that is acceptable to me. And none of that should be acceptable going forward. So as we go into the future, we need to bring the very best in technical talent, technical delivery, technical capability into our national security and into the fight.” 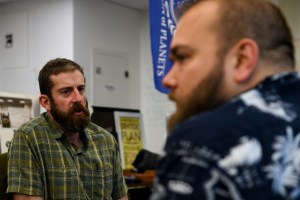