One of the Department of Defense’s largest single-award contracts will have its final request for proposal posted the week of Dec. 7, according to Defense Information Systems Agency officials.

The Defense Enclave Services contract will award roughly $11.7 billion to an IT service provider to help consolidate DOD support agency networks. The contract is part of the Fourth Estate Network Optimization (4ENO) initiative that DISA is leading, under which 22 of the non-warfighting agencies in DOD are having their IT and help desks morphed into a single service provided through DISA.

The contract was initially slated for posting in September but was moved backed while DOD carefully reviewed it. DES is following the same single-vendor award model as the multibillion-dollar Joint Enterprise Defense Infrastructure contract, which has stalled amid ongoing legal protests.

DES is also one of the first major contracts to have the Cybersecurity Maturity Model Certification (CMMC) program be a part of its evaluation criteria. CMMC is the DOD’s new five- tiered security requirement that all contractors will need to have a third-party assessment done to ensure they are implementing the network controls. Initial drafts indicate DISA is looking for contractors to be able to eventually get levels 3 and 4 certifications, which are the mid and upper-tears of security.

The RFP also will contain answers to nearly 300 industry questions, the officials said on a press call Thursday.

DISA initiated a review of the contract at the behest of the chief information officer to ensure all “T’s were crossed and I’s dotted,” Danielle Metz, the principal director for the deputy CIO for information enterprise, said.

While DISA officials stressed the difference between JEDI and DES, the caution over the new contract could be linked to not wanting to have any legal exposure that would repeat the drawn out legal battles JEDI still faces.

“This is an incredibly important endeavor that we have going on here,” Metz said. “A little more due diligence was important.”

Metz and Don Means, the executive for the DES contract, said that CMMC compliance will be an important criteria in evaluating potential awardees. CMMC only recently became an official federal regulation with the ability for acquisition officers to put it into contracts and few assessors have the certification to inspect a contractors’ network.

“CMMC will be considered as the details become more fleshed out,” Means said. 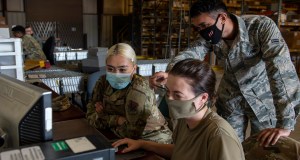 DISA’s $11B network consolidation contract to be released soon