The Defense Intelligence Agency issued a $990 million multiple-award contract for data management and IT engineering services to seven companies.

DIA’s Data Science, Operations, Requirements, Exploitation and Engineering (DORE2) is a five-year contract to support the mission of the agency’s Directorate for Science and Technology.

While the work statement under the final solicitation was classified, the contract broadly covers 11 support areas including data sciences, Internet of Things, social media and open source, as well as rapid engineering and prototyping, among others, according to Bloomberg Government analysts. The solicitation was issued earlier this year.

Booz Allen Hamilton and CACI are incumbents on the preceding  Data Science, Operations, Requirements and Exploitation (DORE) contract, awarded in 2015 for $350 million. L-3 Data Tactics Corp. and MDA Information Systems — which is a subsidiary of Maxar — were also winners on that deal.

The minimum guaranteed to each company under the contract is $10,000.

DORE2 isn’t the only large tech-related contract DIA will compete in 2020. The agency will also soon publish a request for proposals under the Solutions Information Technology Enterprise III (SITE III) contract worth $12.6 billion over 10 years. DIA says the contract “will establish the framework to deliver the full scope of information technology services and capabilities to support intelligence needs for” the agency. 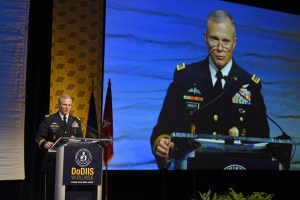