Reforming the way government manages its information technology has spanned several administrations, but the Partnership for Public Service thinks it has a plan on how to finally get it done.

The better governance nonprofit partnered with Accenture to unveil a blueprint Wednesday on how federal agencies could better makeover their IT efforts.

“I think the message here is the world is changing, agencies’ missions are changing and the technology that agencies are using to accomplish the mission are probably changing faster than all of this stuff,” Eric Keller, senior manager for research and evaluation at the partnership, said at an event focused on the blueprint’s release.

“One of the theories we came into this work with was that new technology sometimes requires a new approach to leadership,” he said.

The research centered on five strategies to help smooth agencies’ paths to IT modernization:

To illustrate how the blueprint can work, a panel of CIOs who have pursued digital transformation in their offices highlighted some of the ways they put the plans in action.

Make it all about the end user

Acting Department of Veterans Affairs CIO Scott Blackburn said that after the agency had to regain veterans’ trust in the wake of its waitlist scandal, it centered its innovation efforts on designing systems to serve both veterans and frontline employees more easily.

“When we are doing this, we really need to ground ourselves in the end user and getting the entire management team focused on that goal,” he said. “Our transformation, like all others, it revolves around people, revolves around processes and revolves around technology. And all three of those play an incredible part, and I think people is the most important.”

Leading with one voice

When tasked with applying the Federal Information Technology Acquisition Reform Act to the Department of Interior, CIO Sylvia Burns said the agency involved its executive leadership by forming a FITARA implementation committee that allowed stakeholders to understand their expectations and how they could collaborate on their governance efforts.

The result, she said, was a unified approach that developed from tying in leadership and stakeholders to get a full view of the agency and how to manage the project from the top down.

“Quite honestly, through that process, I feel like we got strong,” she said. “It started with [the belief] that we have to be together in the department first. If we are going to face the bureaus and ask them to do this, we can’t not have our act together.”

Risk is a key component of innovation, but Washington, D.C., while innovation-hungry, is the proverbial poster child of risk-aversion.

To overcome this dissonance, Department of Justice CIO Joseph Klimavicz said that agencies have to harken back to the mission when evaluating new IT projects and make sure to keep the trains running while working on innovation.

“My thinking is that the missions really don’t change when we change administrations,” he said. “As we move through, priorities shift and you need to be sensitive to that. If you want to get funding for your projects, you need to know where the priorities are. But the mission doesn’t really change. 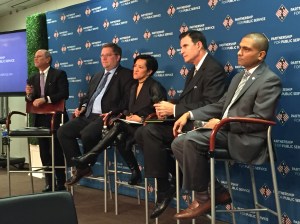 A ‘blueprint’ for government IT reform