A judge at the U.S. Court of Federal Claims has dismissed an appeal brought by military technology company Squire Solutions after the Navy decided not to fund the company’s proposals for a prototype voice recognition system.

Judge Richard Hertling in a written opinion last week dismissed the company’s allegations that the Navy’s evaluation and re-evaluation of its bid submission were arbitrary, and that its re-evaluation of the award was tainted with bias in retaliation for another agency-level protest.

Squire had submitted a proposal to the Navy in response to a procurement process for voice recognition technology that it said could allow soldiers to control unmanned systems and receive critical information on the battlefield, court documents show.

Squire is a New York-based company that builds voice recognition technology for the military and emergency responders.

In his opinion, Judge Hertling dismissed the plaintiff’s claims, but also rejected arguments made by the Navy to court. Lawyers for the Navy had contended that the case was not open to judicial review and that it did not fall within the court’s bid protest jurisdiction. They argued also that the plaintiff did not have the standing to bring the protest.

“The court rejects each of the defendant’s asserted grounds for dismissal,” the judge wrote. “On consideration of the merits, however, the court finds that the Navy’s evaluation was not improper, and that the plaintiff has not carried its burden to demonstrate that the Navy acted arbitrarily or in bad faith.”

The appeal was the third such complaint brought by Squire in relation to the procurement. Shortly after the initial procurement decision, the company filed an agency-level protest with the Navy, which resulted in the service again deciding not to fund its proposal. Squire subsequently filed a protest with the Government Accountability Office, which was then denied in June.

The Navy was seeking the new technology as part of the Small Business Innovation Research program, a seed funding program set up to foster innovation among small businesses working with the government and to improve the commercialization of government research and development.

The Navy declined the company’s proposal and instead in June awarded contracts to BANC3, VRTUL and Design Interactive. The service intended also to award a contract to Ravn, but the company declined the award.

The Navy was represented in court by an attorney from the commercial litigation branch of the Department of Justice’s civil division. 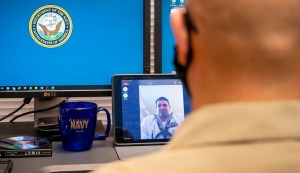