The Government Accountability Office denied Salient CRGT’s protest of five contracts worth $2 billion awarded by the U.S. Patent and Trademark Office for IT modernization, in a legal decision released Monday.

“Salient does not identify, and our review of the record does not find, any distinguishing aspect of either Salient’s or Booz Allen’s proposal that the agency failed to consider,” reads GAO’s decision made July 21. “We deny this ground of protest.”

Salient protested USPTO’s analysis on the grounds the agency weighted past performance and program management and staffing approach — areas where the large businesses received “superior” ratings to Salient’s “satisfactory” ones — more heavily. SAIC’s overall rating was inflated as a result, Salient argued.

“The agency contends that it properly found SAIC’s proposal to be higher technically rated than Salient’s because the relative benefits identified in SAIC’s proposal under the most important factor, small business participation, as well as under the past performance factor, and the program management and staffing approach factor, outweighed the relative benefits identified in Salient’s technical approach,” reads the decision.

USPTO evaluated the small business participation and subcontracting plans of large business offerers Booz Allen and SAIC. SAIC proposed 36% of contract work would be done by small businesses, compared to Salient’s 27%, leading GAO to side with USPTO’s decision.

Salient also protested the award to Booz Allen on the grounds the company’s proposal was unreasonably found higher technically rated that SAIC’s, during a comparative analysis of just those two proposals.

Booz Allen proposed the worst small business participation of the three companies, which Salient felt meant they’d win out in a comparative analysis between the two. But GAO agreed the advantages of Booz Allen’s technical approach outweighed participation shortcomings.

Booz Allen, SAIC and Salient did not respond to a request for comment. 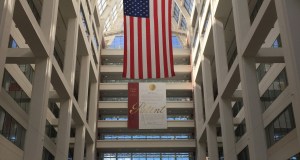