This episode of Gov Actually features guest Heather Higginbottom — who served as Secretary of State John Kerry’s deputy for management and resources until the end of the Obama administration — to give her expert commentary on the dissent channel and the State Department’s most recent use of it.

The dissent channel, created in the Vietnam era, makes it so that “U.S. citizen employees, foreign and domestic, be able to express dissenting or alternative views on substantive issues of policy, in a manner which ensures serious, high-level review and response,” according to the policy. And the latest cable, which amassed more than 1,000 signatures, argued that President Donald Trump’s temporary travel and refugee ban “runs counter to core American values” and that it would likely be “counterproductive.”

The dissents aren’t anonymous — you sign your name to them — but they aren’t typically made public, either.

“Really it’s just this private way to express a view to ensure it’s registered and responded to,” said Higginbottom, who  didn’t see very many dissents issued during her time at State. And of those, none came close to drawing as many signatures as this latest, she said. The second closest was one dissenting against he U.S.’s policy not to intervene in war-torn Syria in 2016 — it got 51 signatures.

“Most of the dissent cables are just individuals — a person with a particular perspective noting their observation,” she says in the episode. “It’s not the case that there haven’t been cables with lots of signatories. But nothing like we’ve seen recently, certainly.”

Higginbottom, and co-hosts Dan Tangherlini and Danny Werfel dive deeper into use of the dissent channel and other measures that give federal employees a voice on critical issues and policies they’re asked to work on.

Let us know what you think in the comments below. 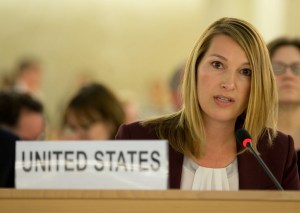