Editor’s Note: This podcast was recorded before the extent of the devastation in Puerto Rico was known after Hurricane Maria. The Gov Actually team sends it thoughts and support to those affected in the recent storms and recognize the heroic work being done to respond.

Gov Actually is back. This week hosts Dan Tangherlini and Danny Werfel address disaster response in the lenses of the recent hurricanes that devastated Texas and Puerto Rico, along with the mass shooting in Las Vegas.

“I don’t think there’s any more substantial expression of government operations than emergency response,” says Tangherlini in the opening.

Listen as Dan and Danny talk about their own inside experiences during their former administration roles coordinating the response efforts during some of the worst disasters in recent decades, like Hurricane Katrina and the Deepwater Horizon oil spill. 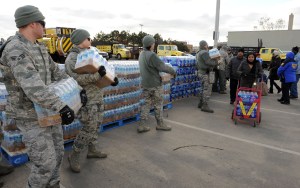