Seismic shifts in technology solutions and a need for modern IT and security skills are prompting a sizeable portion of federal agencies to bring in managed service providers (MSPs) to advance their IT needs, according to a new survey of federal agency IT, business and program executives.

Two in three respondents in the survey, conducted by FedScoop and underwritten by GDIT, say their agency is currently using, planning to use or considering retaining an MSP to support their IT work. 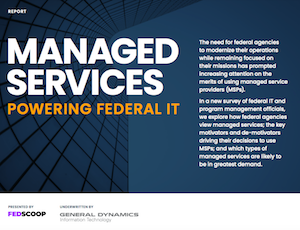 Though the reasons driving agencies to use MSPs vary, one key undercurrent lies in the pressing agency need for cost efficiencies, relying on MSPs with experience deploying cloud, data and cybersecurity solutions.  At the same time, the reasons to work with MSPs have grown more nuanced in recent years.

There are a number of factors motivating agencies to take a fresh look at MSPs. Reducing long-term IT costs ranks highest — by six in 10 respondents. But four in 10 respondents also cite the importance of focusing more attention on mission and less on operations as a driving force. A third of respondents indicate the need to gain greater operational agility and automation, and to reduce risks, are also big motivators.

The types of specific managed IT services demanded by agencies are also in flux.

Asked which IT services agencies had handed over to an MSP over the past five years, help desk services ranks at the top of the list. Over the next five years, in contrast, agencies will look to MSPs most for help with cloud infrastructure services, followed by backup and recovery, cybersecurity, data analytics, networks/infrastructure and software development.

Managed service providers have historically been viewed by federal agencies though the lens of how well they reduce total IT costs, while still allowing agencies to control their IT outcomes. The findings suggest that MSPs are likely to play an increasingly important role in helping agencies manage their overall IT infrastructure, operations and security, much as commercial enterprises now rely on MSPs to keep their IT up to date.

Given the mission benefits of accelerating IT modernization and improving service delivery, the study findings show that agencies are coming to recognize that even if moving to an MSP is cost-neutral, or costs slightly more, it may be well worth it.

Based on the completed responses of 162 pre-qualified federal agency executives with mission, business or IT decision-making responsibilities, the study also explores which factors of success are most important in considering an MSP.

Technical expertise and experience, the ability to fully assess and support an agency’s specific needs and predictable costs are all seen as key factors in successful MSPs. So are the transparency of service level agreements and the ability to adopt or integrate new and emerging technologies downstream once an agency contracts with an MSP.

Managed service models are also continuing to evolve. Rob Smallwood, Vice President of Digital Modernization at General Dynamics Information Technology, a leading MSP provider in the federal market, suggests it’s important to look for MSPs with comprehensive expertise at every level of the IT stack. However, agencies should also look for MSPs that are flexible enough to provide selective, augmented or hybrid support.

“Managed services is about outcomes — what benefits to their enterprise the agency wants to achieve. By focusing on outcome-based managed services, the provider can enable the organization to ultimately achieve what they’re looking for, like cost savings, improved operations, increased value and freeing agency personnel to focus on their mission instead of the IT,” Smallwood said. “That’s also why flexible or hybrid models are preferred by agencies, because they’re working together with the provider to achieve those outcomes.”

The study also concludes that agencies should take steps to understand and fully identify many of the associated support costs that often aren’t transparent in their IT budgets before comparing proposals from MSPs.

Download the full report, “Managed Services: Powering Federal IT” for the detailed findings.

Join GDIT experts as they discuss the study findings and the journey to managed services in a virtual webinar on May 11: Guided Journey to Outcome-Based Managed Services.

This article was produced by FedScoop and underwritten by GDIT. 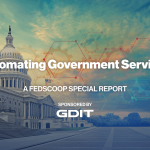 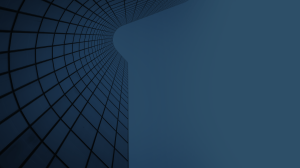