The General Services Administration will exclusively source drones for civilian agencies through a new program from the Defense Department that focuses on the security of the systems, given the concerns over some manufacturers’ supply chains.

GSA is currently making the switch several months after the Blue sUAS program from the Defense Innovation Unit was launched. Blue sUAS was created as a means for government agencies to find secure drones that do not have parts manufactured in China, in compliance with a Section 889 of the fiscal 2019 National Defense Authorization Act. The provision bans the government and its contractors from using certain technologies from China.

“GSA is removing all identified drones that are not approved through the Department of Defense’s Defense Innovation Unit (DIU) Blue sUAS program from [Multiple Award Schedule] contracts,” a GSA spokesperson told FedScoop.

The action will affect approximately 20 contracts, but not cancel them entirely. Contracting officers will be in touch with the drone suppliers that were associated with the contracts, GSA said. The agency anticipates it has enough supply of drones through the Blue sUAS program to meet the demands across government.

The agency’s website directly cites Section 889 of the 2019 NDAA and other trade agreements in its decision making process, stating the government has “an increased risk of non-compliance.”

Agencies such as the Department of Interior use drones to monitor emergency situations and other tasks. But while these agencies once used drones from market-dominating DJI, the devices’s potential cybersecurity vulnerabilities and other concerns became too much of a risk for their continued use. Many agencies have since banned the use of products from China-based DJI in government operations. 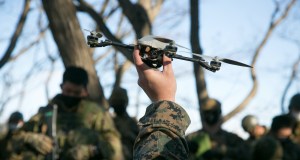