The new priorities include a focus on path-breaking technology including artificial intelligence, cybersecurity, next-generation telecommunications networks like 5G and network-of-network systems. Thursday’s list of priority areas is the first look at a full DOD tech strategy that is expected to be published in late spring or early summer following the new national defense strategy, a DOD spokesperson told FedScoop.

Heidi Shyu, the undersecretary for research and engineering, said the DOD’s research enterprise will re-center its work on the pillars of “mission focus, foundation building, and succeeding through teamwork.”

“To maintain the United States military’s technological advantage, the Department will champion research, science, technology, engineering, and innovation,” a memo from Shyu, who is also known as the CTO, states.

The operative word for winning in areas of innovation will be “cooperation,” according to the memo. Included in the document is a list of groups Shyu wants the document to work more closely with: the defense industrial base, academia, federally funded research and development centers, university affiliated research centers, small businesses, new entrants, startups and international allies.

The long list also includes cooperation “with our competitors” as a goal.

“Successful competition requires imagining our military capability as an ever-evolving collective, not a static inventory of weapons in development or sustainment,” Shyu wrote.

Commenting on the new list of priorities, Margarita Konaev, a research fellow at Georgetown’s Center for Security and Emerging Technology, told FedScoop that it makes sense for the DOD to continue to invest in AI and cybersecurity.

“I think this is an area that over the past year conversation has increased about it,” she said, adding that the list shows the department’s desire to move further towards a battlefield reality where AI-enabled machines work alongside troops.

Editor’s note: This story was updated to include comment from Margarita Konaev. 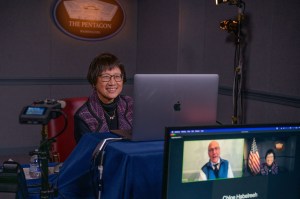