House Democrats are prepared to give federal agencies more IT funding than the White House is seeking to meet the unprecedented demand from teleworking during the COVID-19 pandemic.

A House emergency appropriations bill released Monday would increase much of the technology spending the Office of Management and Budget had initially requested in a memo on March 17. The $2.5 trillion legislation, intended to bolster the wavering U.S. economy, differs from the package that Senate Democrats and Trump administration officials have been negotiating, but it’s possible the House proposal could influence that bill.

Many agencies have struggled with the strain brought on by a policy of “maximum teleworking.” The bill indicates that the government needs billions of dollars more in IT and cybersecurity services to meet the demand.

The Department of Veterans Affairs would receive $3 billion to support telehealth, telework and other IT systems, according to a bill summary, up from an initial $1.2 billion OMB requested for the agency. The VA’s initial request included funds for 180,000 new devices needed to support telehealth and telework. For comparison: the VA’s original Office of Information Technology budget request for all of fiscal 2021 was $4.9 billion. The VA did not respond to a request for comment on what the extra funding might be used for.

The Technology Modernization Fund, which Congress has routinely funded below the levels sought by the Trump administration, would get a $3 billion boost to help agencies with digital modernization and teleworking. Agencies apply to have specific projects funded by the TMF, which received just $25 million for fiscal 2020.

The Indian Health Service would receive more than $1 billion in total supplemental funding, $125 million for its electronic health records modernization and millions more available for telehealth and telework. The total requested for the agency in OMB’s memo was $532 million.

The bill, officially called the Take Responsibility for Workers and Families Act, also aims to offer agencies additional funding to assist in workforce delays or overtime needed to pay employees. The Social Security Administration would have $300 million of coronavirus-related impact relief, including teleworking, “phone communications services” and overtime pay. The White House recently urged all agencies to limit face-to-face interactions with citizens and conduct business over the phone and government-approved platforms.

The strain that teleworking has brought to agencies compounded already needed modernization for some.

The Coast Guard would receive $141 million for “purchases to increase the capability and capacity of information technology systems” and to support the infrastructure needed for teleworking. The guard has struggled with legacy IT and networks that left it at the “brink of catastrophic failure” before the need for telework began, the commandant of the Coast Guard, Admiral Karl Schultz, said in February.

Agencies at the heart of the federal response need extra money for IT, according to the bill. Of the Federal Emergency Management Agency‘s $2.3 billion it would receive if the House’s version remains intact, $45 million would go to”facilities and information technology” needed to respond to the crisis.

The Department of Interior would receive $158 million for department-wide IT, teleworking and cybersecurity needs, according to a summary of the bill. The money could also be spent on cleaning offices, according to the bill text.

The Forest Service’s $14 million OMB request for IT, cleaning and other costs grew to $70 million in total, according to the bill summary. $10 million of that funding would be for “large scale teleworking.” 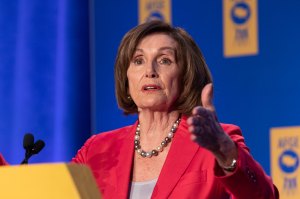