The department’s leadership took to the Hill on Thursday to defend VA’s overall budget request for 2021, which would be the largest funding boost of any agency if the request released earlier in February is passed. Most agencies’ budgets would go the other direction under the proposal.

“I will admit that VA has been underfunded on the IT front through the past several decades,” VA Secretary Robert Wilkie told members of the House Veterans’ Affairs Committee. “We were right at the bottom.”

The requested money would be funneled to cloud migration, IT infrastructure rebuilding and decommissioning legacy systems, he said. Wilkie also wants to use it to recruit and retain a cyber workforce that can better maintain the VA’s networks.

The VA’s largest IT undertaking, the electronic health records modernization program, needs $2.5 billion to rebuild the IT infrastructure the new Cerner system will run on, among other things. The EHR project — estimated to cost $16 billion — will migrate all veteran health data to a new cloud-based system that will replace the current outdated Veterans Information System Technology architecture (VistA) by 2027. The infrastructure replacement will run the VA an extra $1 billion.

But the EHR isn’t the only major IT cost driving up VA’s budget request. The department also wants $309 million for implementation of the MISSION Act, a bill passed last year that expands veterans’ access to doctors outside of the VA network and pay those providers.

The heavy-lift of the program is launching a new IT system to pay family caregivers, Richard Stone, head of the Veterans Health Administration, said Thursday. Currently, checks are signed and mailed out by hand. But 20,000 family caregivers are set to be paid through an online system scheduled to launch this summer.

Other areas of the MISSION Act also require new IT networks to link the health care providers that veterans can now see outside VA’s network, according to the 2012 budget request.

Elsewhere, the VA wants $236 million to spend on modernizing its supply chain, a point lawmakers have been pushing for.

Other IT the VA would like to buy are a commercial-off-the-shelf customer management system, high-powered computing technology and improved data capacity to centrally locate data, Paul Lawrence, undersecretary for benefits, told Congress.

Overall, the VA wants $243 billion in fiscal 2021 — 10% more than last year’s enacted budget. If the request is approved, the VA would become the largest civilian agency in the government, overtaking the Department of Health and Human Services. 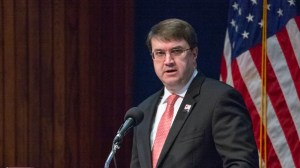