Senior federal IT leader Darren Ash has joined the Department of the Interior as chief information officer.

He takes up the post after previously serving as CIO of the Farm Service Agency at the Department of Agriculture.

Ash steps into the top IT leadership role at the Interior Department (DOI) following the departure of Bill Vajda earlier this year, who left to become chief information officer of Wyoming. Deborah Hartley had been serving in the role in an acting capacity since then.

A spokesperson for DOI confirmed Ash’s arrival to FedScoop and said he starts in the new role today.

Ash has previously held a range of technology leadership roles across government, including as chief information officer of the Nuclear Regulatory Commission between 2007 and 2016.

During his tenure at NRC, Ash worked with trade group ACT-IAC to issue a set of recommendations to help agencies implement the Federal Information Technology Acquisition Reform Act.

The Interior Department is currently developing a cloud contract that would offer a single public cloud service provider up to $1 billion to help move the department’s various agencies to a streamlined hybrid cloud environment. 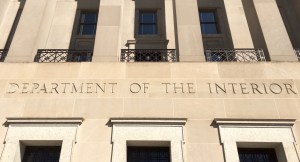