The Integrated Visual Augmentation System (IVAS) the Army recently procured for $21 billion will be the gold standard for other acquisition programs to follow, the Army’s top general told lawmakers Wednesday.

The IVAS system, designed by Microsoft and based on its HoloLens 2 headset, is a “transformation” from the night vision systems the Army currently uses as it also has augmented and virtual reality capabilities built into the headset, Gen. James McConville told the House Appropriations Defense Subcommittee on Wednesday during a hearing on the Army’s budget.

The program shattered the usual multi-year — even multi-decade — timeline for fielding major Army acquisition programs, taking just 28 months to go from prototype to purchase, largely thanks to a novel structure of embedding soldiers in the design process, McConville said. “IVAS is a good example of where we are trying to go with acquisition as a whole.”

Microsoft President Brad Smith told the Senate in February that the company hedged it would win the award and had started building manufacturing facilities early to help speed up the scaling of production.

The system will allow soldiers to train in environments projected in their headsets, giving them experiences in far-flung environments. The Army also hopes the tech will reduce training injuries.

“That cap I think is going to transform how our soldiers operate,” McConville said.

McConville spoke about wanting to transform the Army from an Industrial Age one in the information age, as he has repeated often in public remarks. He pointed to having constant “soldiers touch points” on the project as a successful part of the IVAS process that will be repeated in other programs to make the broader transformation he wants to achieve.

“We must transform the Army,” he said. 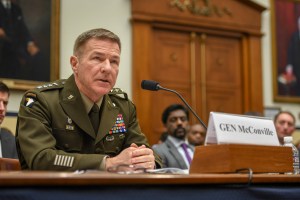 HoloLens 2 headset will be model for Army’s future acquisitions