The Army is at risk of wasting up to $21.88 billion in taxpayer funds to procure its futuristic augmented reality headset because the requirements for user acceptance are not clear, according to the service’s inspector general.

During a recent audit, the Army Inspector General discovered that the service hadn’t set minimum user acceptance levels for the forthcoming Integrated Visual Augmentation System (IVAS), which it says are necessary to determine if the Microsoft-developed AR headset will meet users’ needs.

The IVAS headset is a ruggedized augmented reality and heads-up display system based on Microsoft’s HolonLens 2 device. The Army issued the roughly $22 billion contract to Microsoft for 120,000 headsets last March after successful prototype testing of the platform, which it says “improves soldier sensing, decision making, target acquisition, and target engagement.”

In the highly redacted report on the findings of its audit, the IG established that while the service did take user feedback into account to develop IVAS, the service “did not define clear measures of user acceptance levels to determine whether IVAS would meet user needs.”

“Defining suitable user acceptance levels to determine whether IVAS meets user needs will help ensure that the Army only procures systems that close combat forces will use and will assist the Army in providing a reliable report to DoD leadership and Congress relating to communications, lethality, mobility, protection, situational awareness, and survivability,” the report reads. “According to program officials, IVAS has the potential to change how Soldiers execute missions in close combat. Obtaining Soldier acceptance will help ensure IVAS meets Soldier requirements and optimize the system’s operational benefits at the start of the IVAS distribution.”

Appropriators on Capitol Hill have been similarly wary of the success of the IVAS headset. As part of the 2022 Consolidated Appropriations Act passed in March, Congress put a hold on $349 million in funding for IVAS until the platform makes it through initial operational testing and the Program Executive Office Soldier team in charge briefs appropriators on developments.

That came after the Army, in October 2021, announced delays in bringing IVAS into operation testing until May and launching it into the field until this September after discovering issues with the headset’s field of view.

Responding to the findings of the IG, Army leaders explained that it would be “misleading” to believe the service could waste nearly $22 billion on the procurement, even in a worst-case scenario regarding user adoption, and called the thesis “inflammatory” as the contract’s ceiling is spread over a 10‑year period, including all possible sales to other services and foreign militaries.

On top of this, the service feels that while user feedback is “useful in the requirements development process and prototyping when Soldier‑centered design is most impactful,” it’s not objectively measurable because “Soldier acceptance can be impacted by subjective forces such as fatigue, weather, experience, bias, and familiarity with the legacy system.”

However, Army officials confirmed that IVAS will be required to meet performance measure criteria prior to operational testing, which will include user acceptance. 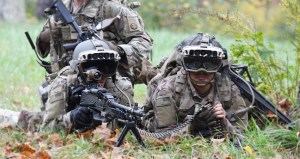 Army’s futuristic IVAS headset could be a waste of $22B without user acceptance, IG warns