The president of Microsoft told lawmakers Tuesday that legal reforms are needed to shorten the timeline for federal contract award protests — a process the company is all too familiar with as it’s tied up in disputes around the Pentagon’s multibillion-dollar cloud contract for more than a year now.

Microsoft President Brad Smith didn’t offer specific recommendations on what the federal government could change to speed up protests, but he broadly suggested there should be a more efficient adjudication process without sacrificing the chance for companies to make their voices heard. Microsoft has not been able to start work with the Department of Defense under the $10 billion Joint Enterprise Defense Infrastructure (JEDI) cloud contract that it won in October 2019 because of a grueling ongoing award protest Amazon Web Services filed that November.

Reforming procurement protests would allow federal agencies like the DOD to acquire and use technology more quickly without needing to wait for outdated acquisition processes to play out, Smith said during a Senate Armed Service Committee hearing on emerging technology development in the DOD

“How do you move quickly when the protest process moves so slowly?” he said.

Others testifying with Smith on Tuesday concurred that the DOD needs to find ways to streamline acquisition to take better advantage of emerging tech.  Hawk Carlisle, the retired Air Force general who now leads the National Defense Industry Association, agreed with Smith on costs of a lengthy bid protest, saying there is no disincentive for companies to file a suit. And ultimately, he said, this hurts the military customers who have to wait for protests to wind through the claims process.

“Don’t disadvantage the person that is waiting for the equipment,” Carlisle said.

The longer Amazon’s protest stretches on, the more future of the JEDI contract is coming into question. Smith acknowledged Microsoft may never get paid or be able to move forward with work under the contract. The DOD also said in a letter to Congress recently it is may have to consider an alternative if the protest continues on much longer.

“We have literally been frozen by a federal court on our performance on the JEDI contract for more than 12 months,” Smith said. 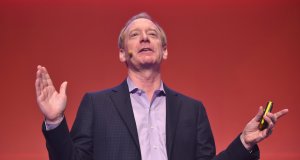