Kathleen Hicks, the nominee to be deputy secretary of Defense, told senators during a confirmation hearing Tuesday she wants to continue pushing the Department of Defense to be a data-driven organization.

Likely to be confirmed as the Pentagon’s No. 2 in the coming days, Hicks said she would take the job of the de-facto chief operating officer and lead by using data to inform business decisions. She also committed to continuing the push to modernize warfighting systems to be more data-centric in new operating concepts.

“As we move into an era of data, the department needs to move there too,” she told the Senate Armed Services Committee.

As deputy secretary, Hicks will likely oversee most Pentagon technology modernization and reform initiatives in place of her boss, Secretary Lloyd Austin, whose expertise lies more in uniformed military operations as a retired four-star general.

Many saw Hicks’ nomination as a counterbalance to Austin with her mastery of the “bureaucratic black arts,” as former Defense Secretary Robert Gates said introducing her during the hearing. Gates also praised her strategic analysis that included work on the recent National Defense Strategy, which pivoted the military to focus on great power competition with China.

Hicks expressed support for using data not only in business and budgetary decisions but also in military operations. She endorsed the military needing to move towards new “operational concepts,” a likely reference to the data-centric Joint All Domain Command and Control (JADC2) concept where battlefield networks are to be linked across domains.

Hicks previously ran the International Security Program at the Center for Strategic and International Studies where she authored and oversaw reports that called for a data-centric, internet-like system of warfare and bringing more technology talent in the DOD.

While she did not mention artificial intelligence during her hearing, in advanced written answers to policy questions she expressed support for the main AI hub she would oversee if confirmed — the Joint AI Center. The latest defense policy bill made the office a direct report to the deputy secretary.

“If confirmed, the JAIC will be my primary tool for guiding and accelerating the integration of artificial intelligence into the Department’s missions and activities,” she wrote, committing to regular meetings with JAIC leadership.

Hicks also voiced support for the current cyber posture of “defend forward,” where cyber operators covertly breach foreign adversary networks to understand their position and get early warnings on potential attacks on U.S. networks. The concept has come under some scrutiny recently given the failure of the U.S. government to see a widespread supply chain breach in the SolarWinds Orion hack.

“I am supportive of the approach,” Hicks said, but added that she needs to examine “exactly how the authorities are being executed,” giving her some wiggle room to adjust her broad support in specific areas. 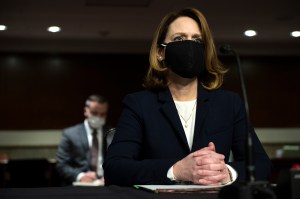 Kathleen Hicks to prioritize data as Pentagon No. 2