The Air Force‘s latest field test for building an Internet of Things-like system for battle added new artificial intelligence, cloud and other technical capabilities, while also linking in allies for the first time.

The Air Force hosted the on-ramp test in Europe in late February, simulating the use of its Advanced Battle Management System (ABMS) — the tech backbone to the military’s larger sensor-driven network-of-networks concept Joint All Domain Command and Control (JADC2).

The Air Force hosts these tests every few months to integrate and “on-ramp” new tech and capabilities into the complex ABMS environment.

This latest test was the first time AI was included as part of the so-called “kill chain” — the steps that lead up to firing on targets. It also was the first time the Air Force was able to swiftly move data between different platforms through a tactical-edge cloud and common data standardization repository, a critical goal Air Force leaders had previously identified.

“We learned a lot about things we do well and things we don’t do well,” Brig. Gen. Adrian Spain, director of plans, programs and analyses for U.S. Air Forces in Europe and Africa, said on a call with reporters Wednesday.

One of the things the Air Force can now say it does — but perhaps too soon to say it does it well — is use AI to dial in a target to fire upon.

Flying above the Baltic Sea, fighter jets pulled in data from the U.S. Army and Navy and other countries’ military assets to guide their high-powered missiles. For the first time, AI-powered algorithms helped process data to break out of legacy stovepipe-plagued systems, said Preston Dunlap, chief architect of for the Air and Space Forces.

“It is super exciting to be able to see that tech getting into the hands of the warfighter,” Dunlap said.

AI technologies like computer vision scanning through drone footage have been used before in ABMS tests. But this time, algorithms directly aided in zeroing in on a target, a first according to Dunlap.

It’s a major step up from the current “tech” used to fuse data: pen and paper. Officers have described walking between hubs of computer screens to jot down notes on what’s happening in the sky and on land, and then using their own human cognition instead of machine cognition to process it.

With new cloud-at-the-edge capabilities tested during the simulation, Dunlap is confident walking and talking can soon be a replaced by networks facilitating machine-to-machine communication.

“Those are pretty awesome capabilities,” he said.

Cloud at the edge

Technology vendors like Amazon Web Services and Juniper Networks came to the Balkans to help deploy cloud computing systems that aided in using the AI algorithms to fuse the data through a standardization library, Spain said.

The networks themselves also got some new networking tech boosts. Assisting the transmission of data was StarLink, Elon Musk’s satellite company that provides internet access from space, Dunlap told reporters.

Dunlap said the Air Force worked with participating vendors to ensure they followed NSA standards on classified systems, allowing the tests to transmit data over classified and unclassified networks. “This pushes the ball pretty dramatically forward,” he added.

Additionally, the test did not need any security waivers because cyber officials specializing in network authorizations were present to ensure the computing systems all remained secure, Dunlap said. “Success means you get an effective capability that is secure.”

Gen. Spain added there needs to be “deep discussion” on real-world security authorities to ensure enough data can be shared without risking adversary access to a network.

The test also took an additional focus on how to protect bases from new threats. A major problem for bases in the age of digital warfare is defending against the small, commercial unmanned aerial systems (UAS).

Dunlap said the Air Force, along with its allies and private sector partners, tested counter-UAS technology. Systems piloted by the Air Force Research Lab were deployed in the field and tested with the new edge-cloud capabilities to detect incoming threats to Ramstein Air Base in Germany.

“Overall, I’m impressed with our warfighters’ ability to command and control a complex targeting process as well as a base air defense scenario,” Gen. Jeff Harrigian, commanding general for U.S. Air Forces in Europe and Africa, said in a release.

Due to cuts in ABMS funding, a test scheduled at the end of 2021 is now off the calendar. This latest test in Europe had to also be scaled back due to funding shortfalls, Dunlap said.

As one of ABMS’s biggest boosters, Dunlap said that new insights would be lost without further on-ramp testing.

“We uncovered things that you wouldn’t uncover in a test range environment,” he said. Further on-ramps will still occur, just fewer of them at a smaller scale. Coronavirus restrictions also forced the Air Force to scale down the number of personnel present for the tests, he said. 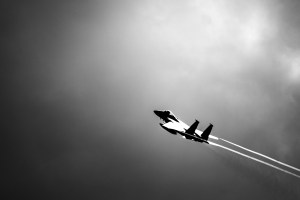