The Department of Defense has issued a $1 million task order to Microsoft under the Joint Enterprise Defense Infrastructure (JEDI) cloud contract for work related to tactical-edge devices.

Details are slim in the DOD award notice published Tuesday. It simply says: “Unclassified Infrastructure as a Service (IaaS) and Platform as a Service (PaaS) and Support Service Package for Tactical Edge Device Accreditation and Training.” The award was officially issued Jan. 6.

While it may not be the most consequential or substantial job to be done under the larger JEDI contract, this task order signals that DOD is continuing to move forward with preparations so that it can soon fully kick off the development of an enterprise commercial cloud with Microsoft.

A DOD spokesperson told FedScoop the work includes “preparatory activities that must be completed before any user task orders can be placed at Go-Live. The scope includes services related to testing, accrediting, and hosting the DoD provisioning tool and Tactical Edge devices.”

And outside of some more administrative-type task orders, it’s the first publicly announced award.

Within days of awarding JEDI to Microsoft last October, the DOD issued a $1 million task order without requirements to the company to satisfy the minimum guarantee of the contract. It subsequently awarded a task order without monetary value to set up a cloud computing program management office “to provide the personnel, processes, and tools necessary to effectively manage JEDI Cloud within schedule, quality, and performance requirements.”

The task order comes as DOD and Microsoft have held off from jumping right into work while Amazon Web Services‘ bid protest is settled in the U.S. Court of Federal Claims, having agreed to Feb. 11 as the soonest they would begin any substantial work, with the exception of “initial preparatory activities.”

However, in a recent court filing, Amazon said it is planning to ask the court for an injunction to stop any substantial work until the lawsuit is settled.

In December, DOD and Microsoft kicked off discussions about work under the contract. CEO Satya Nadella and members of the Microsoft Azure and public sector teams met with DOD CIO Dana Deasy and other senior defense IT leaders.

Deasy signaled at a separate event in December that the department is eager to build out JEDI’s unclassified enclave over the next several months, followed by the secret portion about six months later. JEDI will have 14 early adopters, he said, including the Joint Artificial Intelligence Center, U.S. Transportation Command, U.S. Special Operations Command and the Navy, but he stopped short of naming the rest. 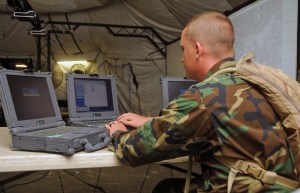